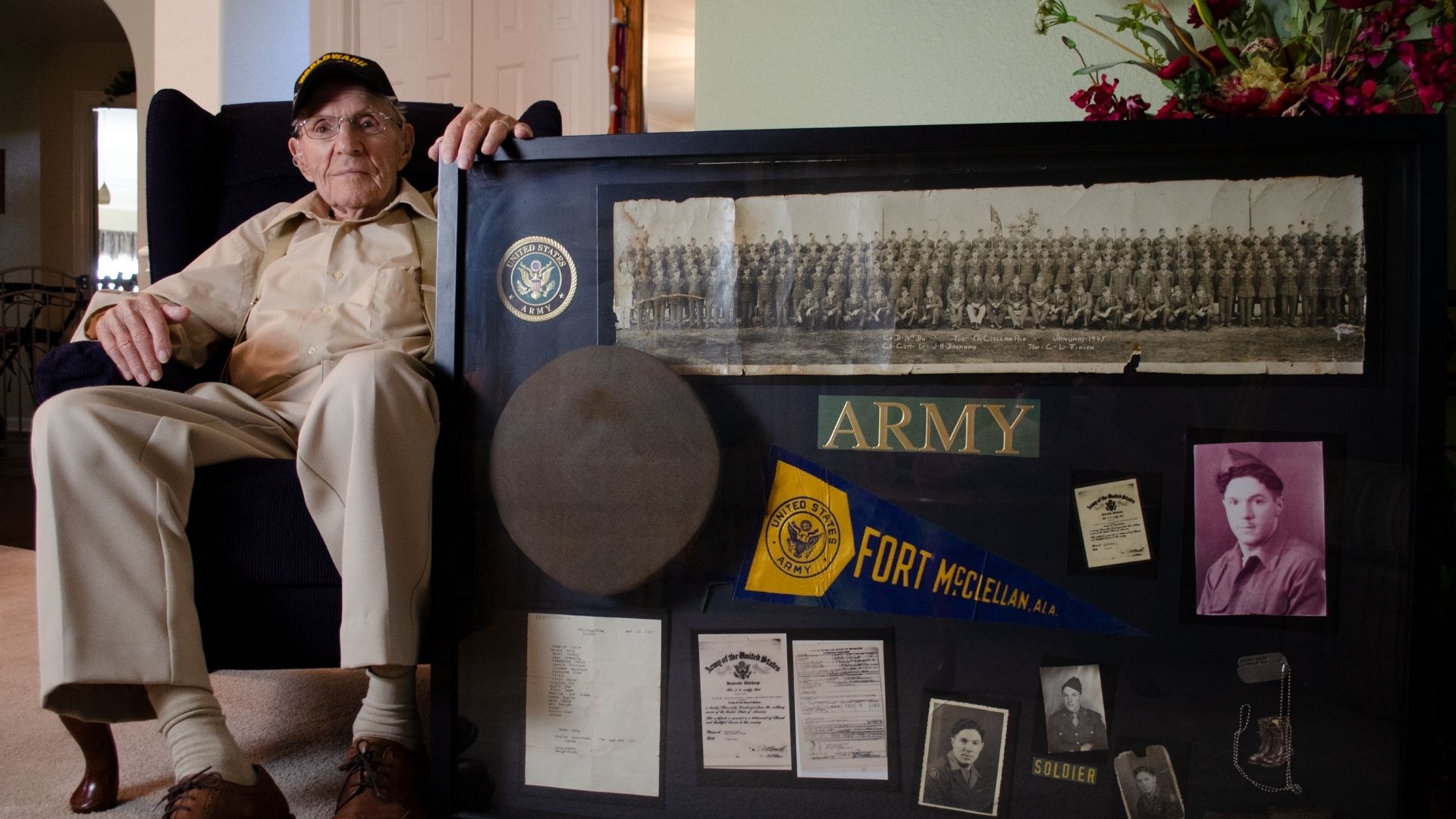 “A man would get wounded, they would saw his leg off and throw it out the window. Every so many days, he would gather up the arms and legs and take them off and bury them.”

This was the first story from Wayne Perry, a veteran of World War II, but it wasn’t about his experience, nor was it about his war.

The “he” in his story was his grandfather, Andrew J. Perry of West Virginia, who fought from beginning to end of the Civil War.

“He told me about one soldier who had four horses shot out from under him, and when a horse would fall, he would jump behind it, and lay down flat, and use it as breastwork, and fire over the top of that horse’s body,” he continued. “He told me about when they were traveling winter time and they’d throw down a bunch of fence rails in the mud, lay down and throw a canvas up over them, and have snow on top of them next morning when they woke up.”

Perry remembered very well his grandfather’s war stories, but he also recalled the omission of details.

“That was about all he told me about the Civil War,” his opening story reaching its conclusion. “He didn’t tell me very much. He didn’t want to talk too much about it.”

Perry is a 101-year-old veteran, who enjoys discussing the war he fought in. The details, though not difficult to recollect, appeared reserved for conversations not recorded, or perhaps simply for those he’s known longer than a few minutes. Or he may have simply taken a page out of his grandfather’s book.

Before entering the war, he drove a gasoline truck in 1942. He had a daughter, Jan Perry, the following year with his wife of 46 years. He worked several months at a defense plant on shells for the 105 mm howitzer. He then worked a farm and was given a deferment from the war. But he soon began to tire of the farm life and the deferments.

“I got two deferments to stay out of the war, and finally I just give up and went in and enlisted,” he said.

Perry became a squad leader in the 106th Division’s Company L 3rd Battalion 423rd Infantry Regiment. The 106th was known as the “Golden Lion” division and was nearly replete with green recruits. It was a division that experienced the German brunt in the Battle of the Bulge.

As he sat at the dining room table, he talked about his time at Camp Atterbury in Indiana and Camp McClellan in Alabama; about collecting kindling and wood, and a massive fire that ensued; learning how to use different weapons like the 30 caliber machine gun, the Browning Automatic Rifle (BAR), mortars, and the bazooka, known to him as the “stovepipe”; marching out 35 miles in full gear and camping for two to three weeks at a time; and working detail.

“A young feller told me, ‘Don’t think I’m getting smart with you, but when you get in the Army and they give you a job, they call it detail. Don’t hurry. There’s another’n waiting for you.’ First day in the Army I found that out.,” he said with a smile.

He soon noted his two favorite things about the Army: the sanitation and the food. From a modern perspective, it didn’t seem worth mentioning. Almost as if it was mentioned for the sake of conversation. As the interview continued, however, it became very clear why those two stood out.

“I come up through the Depression,” he said. “You’d be lucky if you could keep a job making 50 cents a day for 10 hours. Fifty cents. If anybody had any work for you to do, they didn’t have any money to pay you. I have dug out bushes in a field for a dollar a day, taking potatoes and walking home carrying it in a sack. If anybody needed some work, you were thinking corn or potatoes. No money.

“I was born and raised 50 miles from electricity,” he added. “That might sound funny. The first 20 years I spent there (Dunlow, West Virginia), we didn’t have electricity.”

Perry’s personal action in the war overseas was a reflection of who he had become at home. The slight reticence from his grandfather concerning the harshness of battle, the struggle to make ends meet during the Depression, or to merely survive when ends didn’t. He understood that war was cruel and hunger unforgiving. Yet he walked into World War II with the intention to bring some semblance of relief, even compassion, from the brutality. His intention began before deployment.

“We were taught in basic training now if you come upon a wounded German ― his arm off, leg off ― and he’s laying there bleeding to death, stick him with your bayonet. Stick him right down through the chest,” he said. “Nuh-uh. Not this boy. I had a brother who was wounded over there almost bled to death. Somebody stuck him, my brother wouldn’t have gotten home. I said I won’t stick no German when his rifle is 20 foot from him and his arm is laying next to his rifle. God created us as humans. He looks down on all of us. He knows where you’re at and he knows where I’m at. So why kill a man when you know he’s not gonna give you no harm?”

He said there was another reason why he felt this way and added that he hoped to paint a clear enough picture for people to understand.

“Way over here in Germany,” he said, sliding his hand slightly across the table, “there’s a woman sitting in a chair doing some needlework. There’s a little girl sitting on the floor looking up to say, ‘Mommy, when’s Daddy coming home?’ Her daddy is a German soldier. ‘He’s been gone a long time. Write a letter and ask him to come home.’ Well, that guy you stuck back there with your bayonet might have been that little girl’s daddy. You done that, she doesn’t have no daddy. If he’s knocked out and you know he’s knocked out, why should you finish him?”

If he ran into a situation that allowed him to put this into practice, he never said. Regarding the battles he engaged in, he skirted the details in a way that perhaps was reminiscent of his grandfather.

When he did get into the war, his regiment landed in Le Havre, off the coast of France, on April 4, 1945. He said it was cold when he left New York 14 days prior, but warm when he arrived in France. He added that soldiers had already hit the area before they had arrived.

“When it was time for us to go in, two tugs come out, one on each side of our ship,” he said. “The bank was completely covered with scrap arms ― guns, trucks, jeeps, everything.”

When his regiment landed, they were taken by boxcar towards the front. It was an eight day journey. He added that his life jacket would have come in handy as a pillow, if only he could have brought it with him.

“All I had was an Army blanket.”

From the train, they loaded up on trucks that would take them “as far as was safe for the trucks.” The rest of the journey was on foot.

“Our bazooka team had a rule not to fire on churches, cemeteries, or ambulances. One day our bazooka team spotted a rifle barrel sticking through the ventilation in a church steeple; seen smoke coming out of that rifle barrel. The bazooka team done away with the church tower. Didn’t stop to see how many was in it. Sometimes there would be around three or four snipers, maybe sometimes just one, but no one went in to turn things over. We went on.”

He noted that not adhering to his fox hole training saved his life. He said that during basic training, he was taught to create a fox hole that was 6-foot long, 4-foot wide, and 2-foot deep.

“Our fox holes in combat were smaller and deeper because they were only made for one man at a time. If you made it 6-foot long, the track of a tank could run right in on you ― you get the picture,” he said. “I never rode in an airplane while I was in the Army, but I know what it’s like to be in a fox hole and a tank run over you.”

He joked that the only time he ever slept in a fox hole was when he was in training in the US.

At the beginning of the conversation, he set the precedent, perhaps unwittingly, when he referenced going overseas and quickly added, “of course, we won’t talk too much about that over there.”

When asked if the war itself was something he preferred not to go into detail about, he responded, “Well, we don’t say too much about frontlines. Really I was only up at the front four days, but I seen all I wanted to see.”

It is a common theme among veterans to not offer too much detail about their time in combat, especially to a person they have only just met. It is more than understandable. Honestly, it seems almost irrational to expect anything more than the lighter side of war to be divulged ― if one can describe it as such.

His daughter, Jan, listening from the other room, acknowledged that there were a lot of stories and details he had left out of the conversation. Things that he had told her. She managed, however, to pull one story from him before the interview came to an end. One that came after the Germans had surrendered.

“When we was delivering Germans to the prison, there were hundreds of Germans, all ages, men and women and children along the railroad station starving to death,” he said. “Germany had run out of food and all the men who farmed was in the war. We had French bread in our boxcar for our trip, stacked in there, not wrapped. I told one soldier to stay in the boxcar and watch our food. I told another boy to grab some bread and let’s give it away. Give it to children. Don’t give to no grown people.

“I handed a little girl a loaf of bread. I never will forget her. Blond hair hanging down. She was starved till her eyes were sunk way back in her head. She pulled off into that bread and stuck it in her mouth like that. A woman reached up and patted me on the shoulder and said, ‘The American soldiers sure have big hearts.’”

Perry would stay nearly a year after the German surrender, stationed as a sergeant over one of the prison camps in the French Zone. During his time in the war, he learned French and German, and during the interview would occasionally break out into a phrase and then interpret himself.

After coming home in March of 1946, Perry returned to working on a farm. Eventually going from more than 100 acres to a 20 acre farm. He recently sold his land in Ohio, a place he pronounces Ohi. After selling, he called Jan to ask her to put him into an assisted living home. Jan said that when he asked her to do that, she thought back on all he had done for her and their family. So she declined his suggestion and informed him that he would be coming to Texas to live with her and her family.

Perry will turn 102 come November, and no matter how much time passes, he will never forget the details of what he experienced. When it comes to discussing those details, his grandfather’s example appears to take precedence.