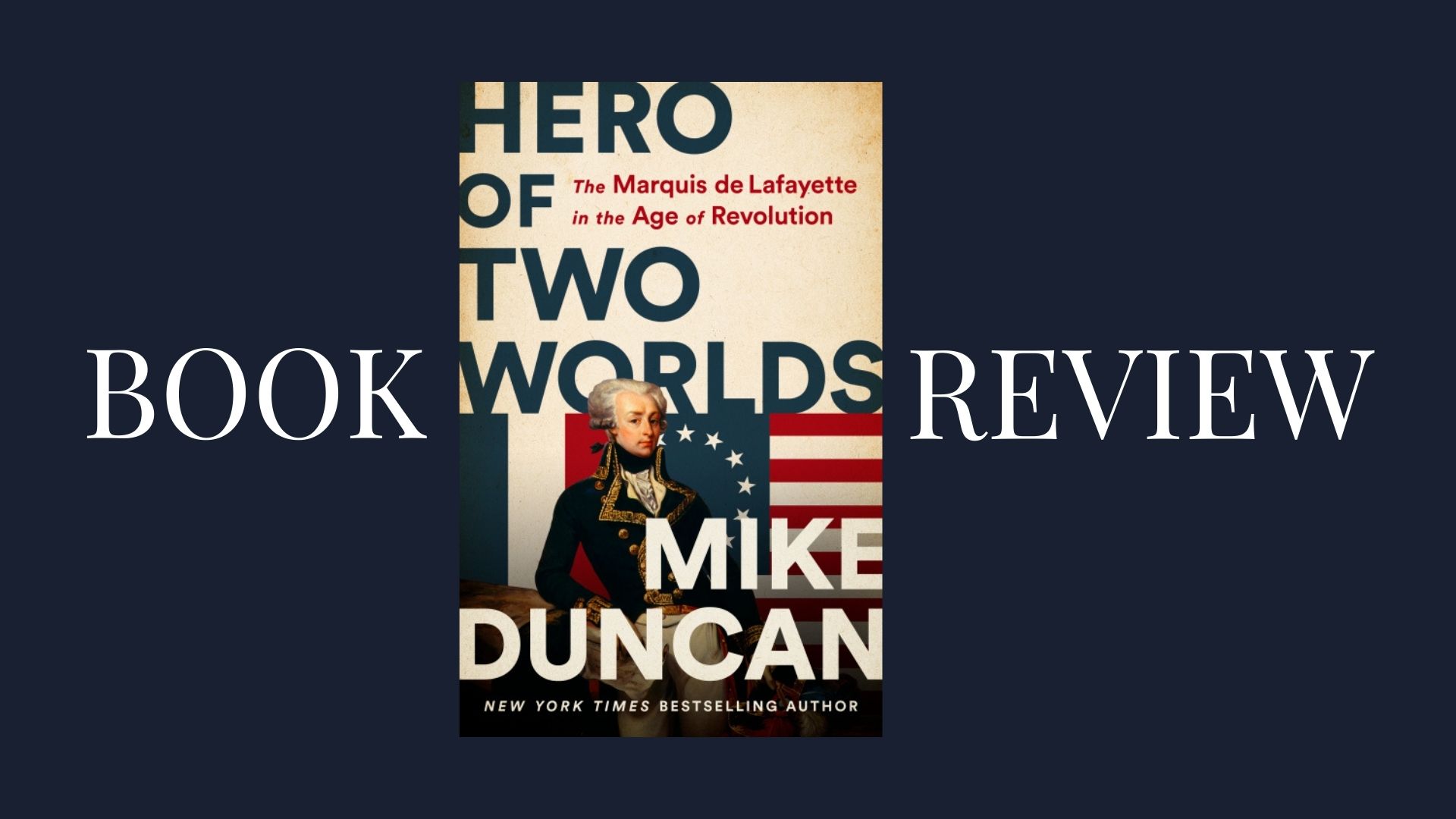 Book Review: ‘Hero of Two Worlds: The Marquis de Lafayette in the Age of Revolution’

Mike Duncan launched his first history podcast, “The History of Rome,” in 2007 when podcasting was relatively new but surging as a new medium. It is now a pillar in the history podcasting community. In 2013, he started his second podcast, “Revolutions”―undeniably a second pillar.

His in-depth research, required for creating such successful podcasts, has lent him the ability to successfully enter into another, much older, medium: books. Duncan’s second book, “Hero of Two Worlds: The Marquis de Lafayette in the Age of Revolution,” is a fine addition to the massive collection of American Revolution scholarship. In my opinion, it is a necessary addition.

The Marquis de Lafayette is a recognizable figure for Americans. He was the French nobleman and military officer who came to aid the colonists in their fight against Britain during the American Revolution. Aside from his arrival, bravery in battle, and his close relationship to George Washington, most know Lafayette on a very surface level. Even the previously mentioned points are vaguely known.

Duncan provides a detailed work into Lafayette’s arrival as a 19-year-old (disobeying the French monarch to do so, which made him a fugitive), his bravery in battle (chock full of brilliant maneuvers, even when in retreat), and his relationship with Washington (which turned from a misunderstanding of Washington’s “welcome to the family” statement into a full-fledged surrogate father and adopted son relationship).

Duncan’s title “Hero of Two Worlds” was a moniker bestowed upon Lafayette in France during the French Revolution. Fittingly, Duncan follows suit by splitting the book into two worlds: America and France. Though he assumed different roles in each revolution, there is no question that each role was significant.

Lafayette may have been an adventure seeker, but he also (which Duncan makes clear) was a believer in certain ideals. These ideals—like equality, liberty, and republicanism—were very much the products of the Enlightenment.

Duncan takes the reader through Lafayette’s growth as a man during revolutionary times. Some may view Lafayette as conflicted or confused in his evolving ideals, but that would be a mistake. We simply get to see him mature and firmly root those beliefs through discussions with military officers and political thinkers, as well as experiences through battles both military and political.

Those ideals, presented as mere hopes and ideas during the American Revolution, were met with success at the throwing off of the British monarchy. Then firmly planted, those ideals became the driving force for his desire to see a constitutional monarchy in France.

The life of Lafayette was a tireless one. After reading the book, one wonders how he could have had the energy to do so much, almost always for the right reasons, though not always with the desired outcomes. Truly, this is how one should define a hero.

There is no denying Duncan’s ability for research, as his podcasts have proven. He spent several years in France conducting research for and writing this book. But massive research doesn’t equate to good writing. Luckily for readers, Duncan is an exceptional writer who paints vivid imagery and mixes in humor that does not take away from the book’s focus.

Duncan does a superb job of filling in the necessary details of Lafayette’s life―both triumphs and tragedies―and does not allow himself to get bogged down in the surrounding affairs where it does not personally impact his hero. This he does wisely when discussing the military rise of Napoleon, for example. Duncan lightly touches on this important rise, but he does not attempt to write a quasi-biography of Napoleon’s conquests, which would do a disservice to the book by steering the reader away from the central figure.

Lafayette lived through three of the most iconic and significant moments of the early modern period: the American Revolution, the French Revolution, and the Napoleonic Wars. Of the many figures from this era who have received their just due in biographical form, Duncan has proven unsparingly that Lafayette deserves to be among them.

The author does a fine job of lightly touching on various subjects when necessary. One subject, however, was written in poor taste, regarding the relationship between Hamilton and Henry Laurens. The single line, written rather flippantly and without reference, is fodder for scandal made for the tabloid, not a work of historical scholarship.

In a book of 436 pages plus bibliography, which is extensive and primarily includes, happily I might add, contemporary sources, I view the single line as merely unfortunate happenstance. Duncan has written a defining book on the great Frenchman and close friend of early America. “Hero of Two Worlds” is a book of value about a man who was of great value to America, France, and ultimately modern Western civilization.