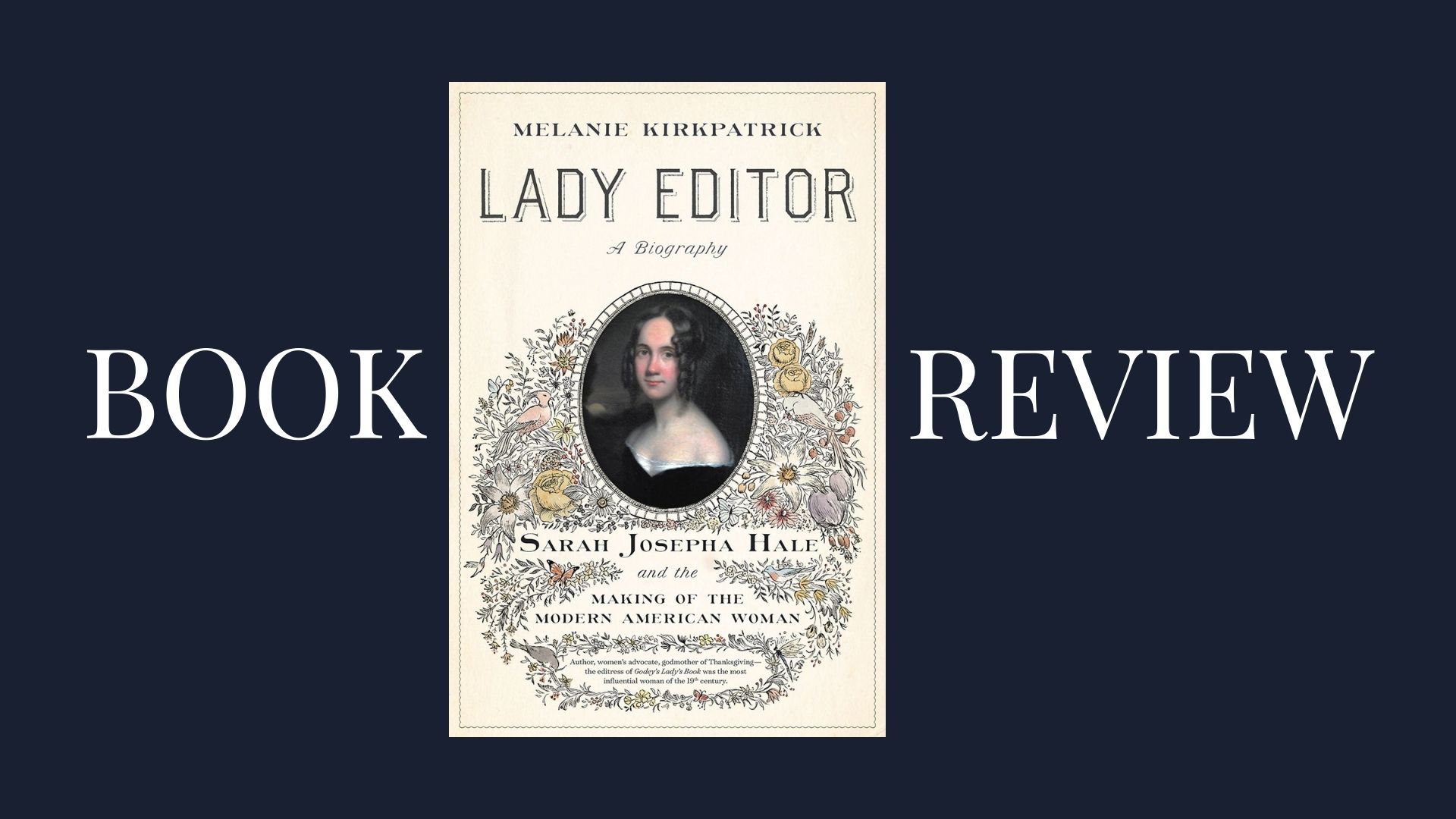 It’s a name that many, if not most, people are unfamiliar with—unless they remember the name of the author who wrote the nursery rhyme “Mary Had a Little Lamb.” I was unfamiliar with Sarah Josepha Hale until reading this book, but upon completing it, I feel a sense of regret knowing that she has been all but forgotten. Melanie Kirkpatrick’s new book “Lady Editor: Sarah Josepha Hale and the Making of the Modern American Woman” looks to change that, at least to some degree.

The story of Hale is one of perseverance, courage, and talent, girded by wisdom. Kirkpatrick takes the reader through Hale’s young life that begins in 1788 (died, 1879), the year before the Constitution was ratified. The following year, President George Washington made his Thanksgiving proclamation. This holiday would play a pivotal role in Hale’s life.

Hale: A Woman of Perseverance and Wisdom

As a woman in the early 19th century, Hale did not receive a formal college education, but her brother, who attended Dartmouth, gave her “a rough equivalent.” It was this education that would greatly improve her life after her marriage ended in tragedy.

Kirkpatrick only briefly describes the marriage, but gives just enough detail to tell the reader that Sarah was unquestionably in love and happy with David Hale. But one fateful night—fateful for numerous reasons—he would contract pneumonia and die, leaving her with four children and another on the way.

Kirkpatrick highlights the virtues in Hale that give any character—real or imagined—the ability to succeed. Her perseverance is ever-present in the book, from her time as a seamstress struggling to make ends meet to her time as editor of one of the most influential magazines in America.

The author takes the reader on a long journey of how perseverance guided Hale toward her North Star: literature. While a seamstress, she made time to write and submit her writings. She had talent, and this talent was discovered. Once discovered, she was offered an opportunity to become a magazine editor, and this opportunity would require several difficult sacrifices: She had to move to another town and to settle her children, save one, with relatives.

The decision to take the job came with some criticism, but Hale’s decision would prove worthwhile, not only for herself and her children but also for the nation. She would eventually go on to become editor of Godey’s Lady’s Book. Under her leadership, the magazine would experience a boon, growing from 10,000 subscribers in her first year to 150,000 subscribers 23 years later. At the time, the average number of magazine subscribers was 7,000.

As an editor, she had an eye for talent, publishing some of America’s greatest writers in their early years, including Nathaniel Hawthorne, Edgar Allen Poe, and Harriet Beecher Stowe.

Her work was not restricted to the editorship of the magazine. She wrote plenty—from books and poetry to letters to the most powerful people in the world, including President Abraham Lincoln and Queen Victoria. Her writings, whether public or private, had powerful sway. This sway, however, did not stem from manipulation or the power of her personal influence. No, as Kirkpatrick demonstrates, this sway stemmed from her wisdom. It was wisdom steeped in conviction for causes and ideals that she felt were right.

One of those causes was to establish Thanksgiving as a national holiday. Over the years as editor, she petitioned a long string of presidents on the Thanksgiving cause, requesting they do what Washington did. She viewed the holiday as a possible moment of unity for the country.

Ultimately, at Hale’s behest, Lincoln finally made that Washington-esque proclamation in 1864, shortly after the Battle of Gettysburg. Since that year, the country has continued to celebrate the holiday in unity, though it wasn’t until 1941 that it was adopted as a national holiday.

Hale: A Pioneer for Women

Hale was undoubtedly a pioneer for women. Kirkpatrick demonstrates how she became a guiding figure for many of America’s women, regardless of age, socioeconomic level, or location (rural or urban). “Lady’s Book” proved a near be-all and end-all for American society by providing influential works of literature, tips on etiquette, and even recipes—the first magazine to do so.

Hale’s magazine and her monthly editor’s column helped pave the way for women to enter into other areas of the workforce. It often celebrated pioneering women, like author Frances Hodgson Burnett, nursing innovator Florence Nightingale, and astronomer Maria Mitchell. Certainly, her own success was an influence and a convincing aspect of the argument as well.

‘Modern’ as a Misnomer

From the book’s cover, one might view Hale’s “making of the modern American woman” in strictly modern terms. But one would err in doing so. Hale would be appalled at some major aspects of the modern feminist movement that have ushered in the sexual revolution, abortion rights, and an abandonment of traditional American values. Kirkpatrick’s chapter “The Dignity of Housekeeping” might well appall the modern feminist in return.

Kirkpatrick openly presents Hale’s views that were controversial then and are controversial now, though for very different reasons. In some instances, Hale may appear self-contradicting, but her opinions were always well thought-out. She wanted women to be able to enter the workforce, but didn’t believe they should be in every industry. She wanted women to be an influence on society, but defended the temperance movement far more than the suffrage movement. She felt women shouldn’t demean their moral standing by involving themselves in politics, even at the foundational level of voting. She wanted unity for the country, but never wrote or allowed stories directly discussing the Civil War.

Hale was more than the author of one of our most famous nursery rhymes and godmother of the Thanksgiving holiday. Her ability to thrive at a time when widows with numerous children were typically destined to a life of struggle, even poverty, makes for an inspiring story. Kirkpatrick has delivered a well-written, well-researched, and inspirational story about a historical figure that has been all but lost to history.

In a twist of irony at the end of the book, Kirkpatrick notes that Hale has yet to be inducted into the National Women’s Hall of Fame in Seneca Falls, New York. Perhaps this book will inspire modern American women to do so. Regardless, Kirkpatrick has done a service for Hale by placing her where she belongs: in the modern American mind.