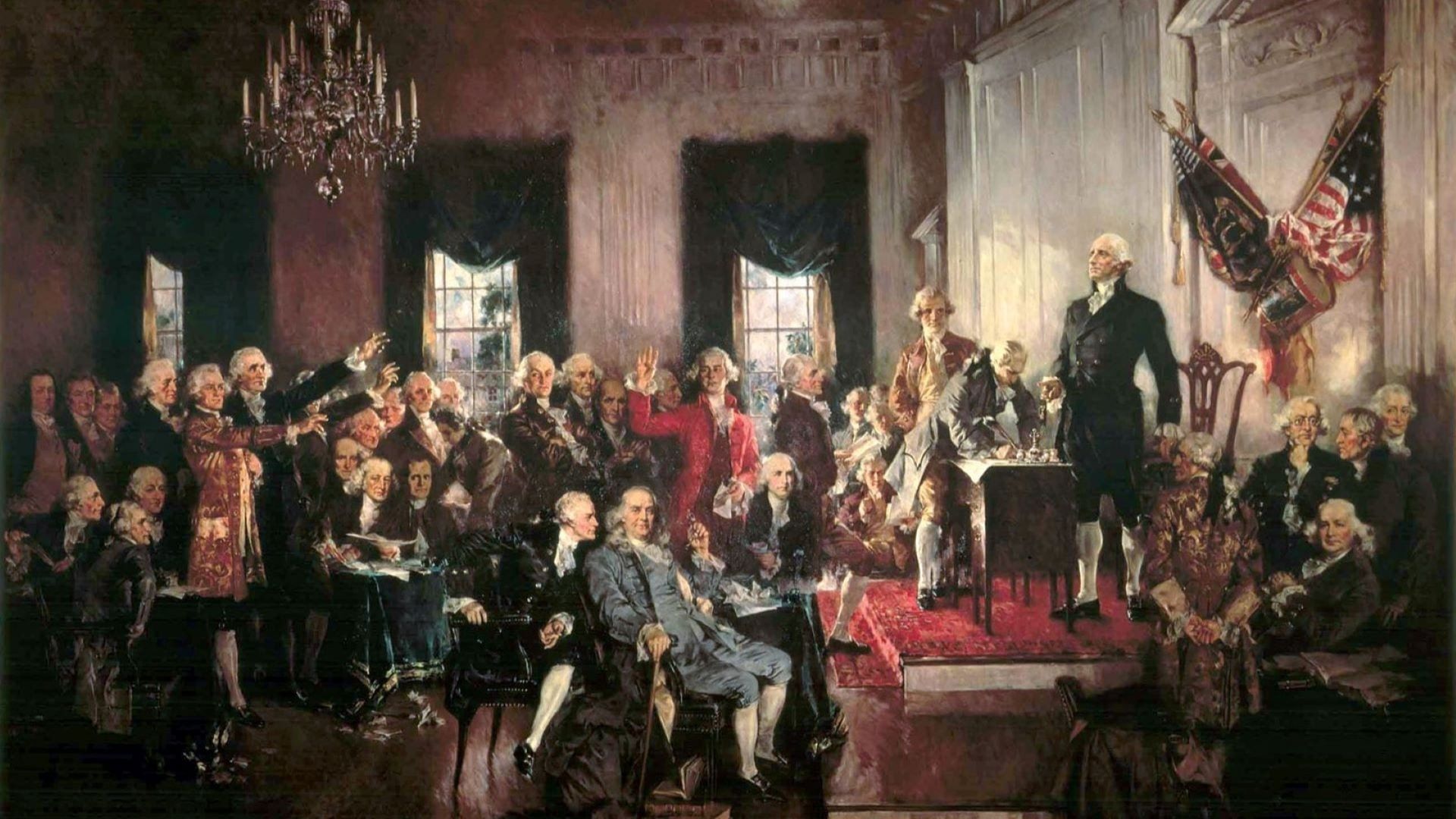 The campaign trail will soon begin for both parties, and there is the continual narrative that the trail itself is mapped out all wrong. There is rising concern that the national voice is not being heard in our national elections. The republic that is America has foundational flaws that continue to wreak havoc on the majority of Americans.

A recent op-ed in Business Insider stated a number of problems Democrats are having with how the whole federal system is set up. But are these actually flaws or safeguards? Let’s take a look at these issues that many Democrats maintain are unfair and undemocratic.

Michael Gordon, who wrote the BI op-ed, provided polling statistics regarding several hot topics, like gun control and climate change. These polls indicated substantial American support for these issues. But surveys and polls are not voting stations. Representatives and Senators do not represent the nation. They represent their specific districts and states. That often seems to be lost on many Americans.

Democrats should keep in mind that the House is currently more than capable of creating bills that support these issues, although Senate approval would be unlikely, and would most definitely be vetoed by the sitting president. Even so, if these bills got through Congress and were vetoed, they could still take it up again, pass it, and the president would be defenseless against it.

The day the Affordable Healthcare Act was passed in 2010, the Kaiser Family Foundation poll showed that 46 percent favored the act while 40 percent disapproved (14 percent had no opinion in the poll). The Democrat-led House and Senate passed the bill then were summarily voted out of power the following election. It is reminiscent of Reagan’s Tax Reform Act of 1986 when CBS and The New York Times conducted a poll shortly after the bill passed that showed 38 percent approval compared to 34 percent disapproval. The Republicans lost the Senate and lost five seats in the House in that year’s election. More recently in 2017, polls showed that Americans disapproved more than approved of the Trump tax cuts. The following election, however, Republicans gained Senate seats, but lost the House.

The fact is that Congress is there to represent their constituents. Representatives and Senators do not represent the nation. They represent their districts and states. They weren’t voted in to adhere to the polls. Polls are useful, but they don’t equal votes. Polls can be wrong. The 2016 election confirmed that in no uncertain terms. (And for good measure, on the other side of the Atlantic, Brexit polls continued to show slightly more Remain than Leave.)

Gordon echoed the sentiment that the Senate structure made sense when the Constitution was ratified in 1789. You know, when there were 13 states. The one-senator one-vote scenario hurts the democracy, according to Gordon. He states that “smaller states have a significantly disproportionate voice, and the Republican Senate majority represents a historically low proportion of the country's population.” This may be because we are not a democracy. We are a republic, and an extended republic at that.

Technically, Gordon’s view that it made sense in 1789 is actually a bit of a non sequitur. If it only took nine states to ratify the Constitution, the Constitution—the basis of this country’s existence —could have been ratified without any of the large states ratifying it. The logic that the Founding Fathers had then still applies today. The size of the state matters in the House, not the Senate. In the Senate, it is about the state and its sovereignty. Not how many people can fit in it.

James Madison clarified the matter in Federalist Paper 62: “The equal vote allowed to each State is at once a constitutional recognition of the portion of sovereignty remaining in the individual States, and an instrument for preserving that residuary sovereignty. So far the equality ought to be no less acceptable to the large than to the small States.”

According to President Trump, the Senate, led by Mitch McConnell (R-KY), will have confirmed 182 federal judges by the end of 2019. If Democrats are complaining, as Gordon is, about the amount of conservative judges filling federal benches, they should look to their own party as the source of the problem.

The Senate used to require a 60-vote majority to end a debate or filibuster on the floor. But in 2013, former Senator and then-Majority Leader Harry Reid utilized the nuclear option, which allowed for a simple majority to amend the rules of the Senate and end debates on the floor. This allowed the Democrats to move ahead more easily, and now the Republicans are doing the same. McConnell has merely picked up the mantle left him by Reid.

Regarding the nation’s most powerful court, Gordon complained of the Senate’s “unprecedented stonewalling” of President Obama’s SCOTUS nominee Merrick Garland and rushing through President Trump’s nominees. The logic would follow that McConnell and Obama had two very different agendas, while McConnell and Trump’s are quite similar. It proved to be a brilliant move for Republicans.

In regard to “unprecedented”, the treatment of Trump nominee Brett Kavanaugh was more than unprecedented. It was disgusting. The treatment of previous Republican president nominees Robert Bork and Clarence Thomas by Democrat-held Senates were hardly civil. Kavanaugh, however, was proverbially tarred, feathered and ridden into the Supreme Court on a rail. It was full of false, convoluted, and uncorroborated stories that probably had Garland breathing a sigh of relief he hadn’t had to go through the same thing—though that type of precedent is one Republicans have never set for themselves.

GET RID OF THE ELECTORAL COLLEGE

The fact is that the Electoral College is stunningly brilliant and has maintained its credibility over the past 230 years. The fear for the small states was that every decision that would affect them would be made by the large states. There were countless compromises made among the Founding Fathers in Independence Hall in 1787. One was referenced earlier with each state being equally represented in the Senate. The other was the Electoral College, which protected small states from the tyranny of the large states.

Gordon argues against this, as do many Democrats, stating that those fears are no longer valid. If delegates, however, were worried about large states in 1789, how much more should they be worried now? They should be far more worried. The 10 most populated states account for approximately 178 million people, which is more than half the population. The top four states account for 110 million. It would take 35 of the smallest states and the District of Columbia to account for that total. The Electoral College establishes what is called the balance of power in the states. It is the compromise that gives all states a say, but the largest states the biggest say.

Presidential-hopeful Elizabeth Warren (D-MA) stated, “My view is that every vote matters and the way we can make that happen is that we can have national voting and that means get rid of the Electoral College—and every vote counts.” This equates that every vote counts, but not every state. Only the large states with mass populations count. So wherever large states, like California, Texas, New York, or Florida want to go, everyone must go.

Gordon’s primary complaint is stated in his headline that the government no longer represents the people, yet he complains that presidential elections come down to battleground states. Much like his article is a microcosm of the Left’s many complaints, the battleground states are a microcosm of America. A diverse population is typically split down the middle between Democrat and Republican. Win those states and you have undoubtedly connected to a larger extent with the people on both sides of the aisle. Win California and New York? Win Texas? Those are partisan states. Win Florida? That’s bipartisan and that’s a political accomplishment.

The fact is the Founding Fathers didn’t have the Republican and Democrat parties in mind. They did, however, have people in mind. Primarily people who turn into factions, which Madison strongly warned against in Federalist Paper 10. He stated that “When a majority is included in a faction, the form of popular government, on the other hand, enables it to sacrifice to its ruling passion or interest both the public good and the rights of other citizens. To secure the public good and private rights against the danger of such a faction, and at the same time to preserve the spirit and the form of popular government, is then the great object to which our inquiries are directed.” That great object was achieved with the creation of the Electoral College.

It seems that Gordon, Warren, and, unfortunately, too many other Democrats wish to undermine one of the most important principles of our Constitution. Our Founding Fathers understood history and what happened with pure democracies, in particular Ancient Greece. Madison warned that “such democracies have ever been spectacles of turbulence and contention; have ever been found incompatible with personal security or the rights of property; and have in general been as short in their lives as they have been violent in their deaths.”