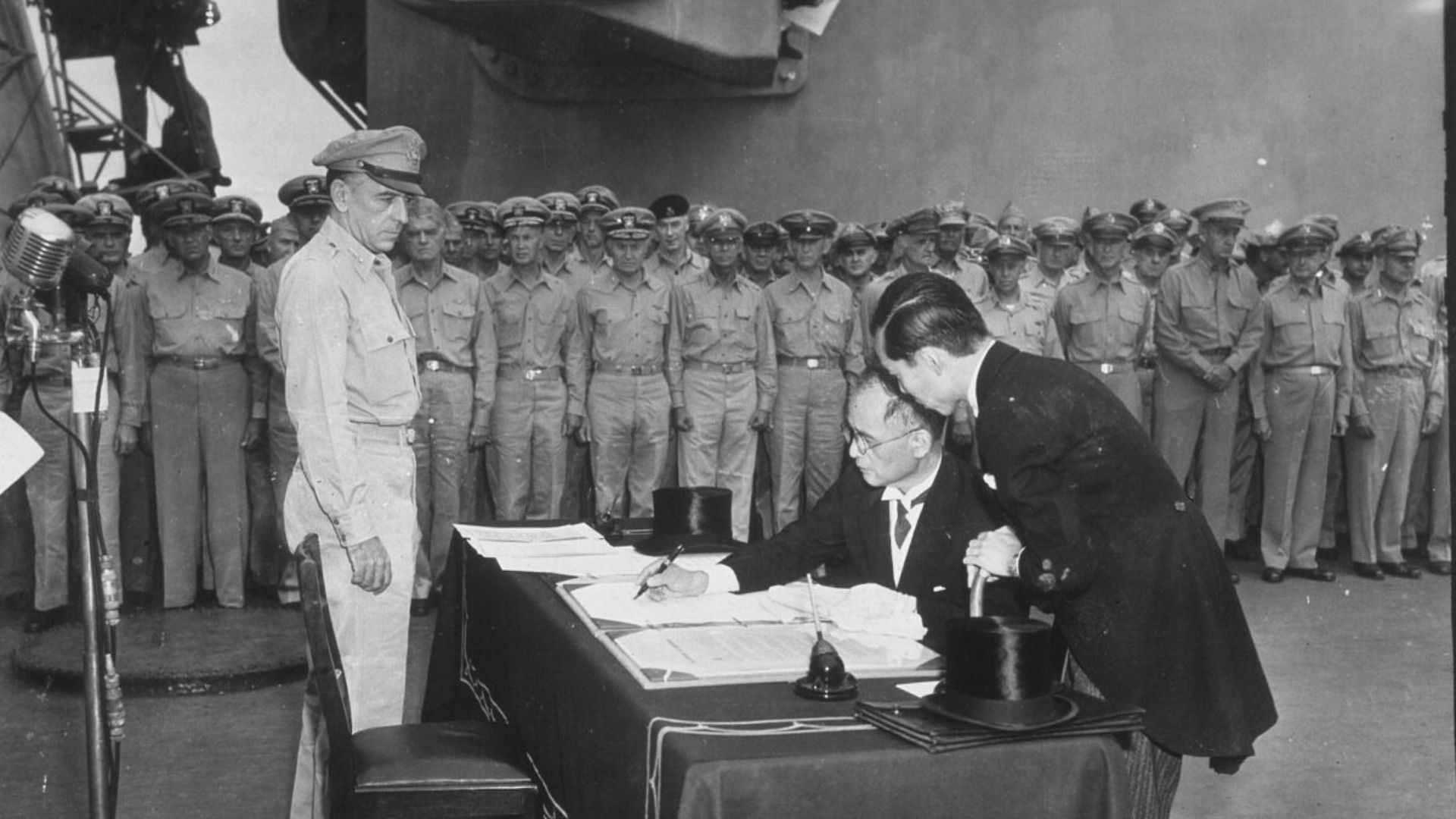 When World War I came to an end, Germany was humiliated by the Treaty of Versailles, yet boasted that it had not been conquered, or even invaded. Externally, the treaty would require that the blame fall to it for starting the war; internally, it would gloat in the triumph of not suffering the cataclysmic fates of its neighbors—fates for which it was very much responsible.

The Allied Powers were aware of the two options placed before them in November 1918: continue the war against Germany or accept an armistice. Describing it as a mere choice, however, does not do justice for the weighty decision that had to be made.

By war’s end, America had suffered 117,000 dead after only six months of fighting (more than half were non-combat deaths). The militaries of the Allied and Central Powers suffered much more. France suffered 1.4 million, Britain nearly 1 million, Italy 650,000, Germany 1.8 million, Austria-Hungary 1.2 million, and Russia 1.7 million, even after its new Bolshevik government had signed the Brest-Litovsk Treaty in March 1918, bringing hostilities between it and Germany to an end.

The decision was not just about ending the war, but about ending the suffering. It was a war that lasted longer than most anyone expected, and was far more devastating than anyone dreamed. When Germany hinted at a ceasefire, it ushered in a deep global sigh of relief. Those two aforementioned options were quickly pared down to one: peace.

The British economist John Maynard Keynes wrote, “We have been moved already beyond endurance, and need rest. Never in the lifetime of men now living has the universal element in the soul of man burnt so dimly.” He called the moment immediately after World War I “the dead season of our fortunes.”

Many historians and contemporaries, such as Keynes, predicted that this peace would come at a heavy cost. The dead season would continue for decades in the aftermath of what many would describe as “winning the war, but losing the peace.”

In the ensuing years, the Allied Powers would disconnect from each other. Italy, one of the four powers administering the peace process, actually walked away from the peace talks of 1919. Britain would become weary of checking Germany’s disregard for the treaty agreements. France was too weak to enforce them alone. Italy would undergo a revolution, leading to the rise of Benito Mussolini. America would elect a new president, Warren G. Harding, and return to political isolationism. And most of Europe would focus much of its concern on the spread of communism.

A peace had been signed, but the war had not been finished. The interwar years of 1919 to 1939 would begin, which would result in Germany’s rearmament and the weary world ignoring it. British Prime Minister Neville Chamberlain’s “peace for our time” was merely part of the prelude to World War II.

The world again found itself facing the same situation at the end of World War II, not with Germany, but with Japan. The Empire of Japan had struck first against America. Now America was closing in.

The war in Europe had officially come to an end in May 1945. Japan had lost its primary allies, Germany and Italy. On the night of March 9 to 10, Tokyo suffered the most devastating raid in recorded history with some 300 B-29 bombers destroying 14 square miles of Japan’s urban core and killing approximately 100,000–150,000 people. More than 60 other cities would be bombed by summer’s end. By June, 80 percent of Japan’s production had been burned down.

For Japan, the war was over. For America, it was not. American victory was inevitable; Japanese surrender was not.

As American troops continued to dominate the war in the Pacific and move closer to Japan’s mainland, the government of Imperial Japan was producing propaganda aimed at its people and preparing them to fight to the death once the Allies arrived.

But if more than 100,000 lives were taken in one night during the Tokyo raid with only 300 bombers, consider the cost if the strategic bombing campaign of Gen. Curtis LeMay had been utilized to its full capacity. It would have been approximately 15,000 bombers with the capacity to bomb around the clock, all throughout the mainland. Japan was one of the most advanced countries in the world. Had this strategic bombing campaign been conducted, it would have, as historian Victor Davis Hanson once stated, sent Japan back into the Stone Age.

Ultimately, it took scores of cities to be bombed, the devastation of Tokyo, the destruction of Hiroshima and Nagasaki, and the threat of American and Soviet invasion (the USSR had just taken Manchuria) for Imperial Japan to surrender, and even then, there were factions within the government that tried to stop the surrender.

Japan had previously hinted at conditional surrender, and had reached out to Moscow for such a purpose. This is proof that the government of Japan saw the writing on the wall. America, however, was unwilling to repeat the same mistake the Allies committed 27 years prior. A conditional surrender was not an option (Japan would finally accept, and America would agree to, the terms of surrender that allowed Hirohito to remain in power as Emperor, even if as just a figurehead).

An Unquestionable Victory and Defeat

Germany had been the aggressor in 1914. By the end of 1918, it had exited the war with the country still intact and a people believing it had not tasted defeat. While the rest of Europe rebuilt its infrastructure, Germany prepared for another war in retribution for a loss they felt never happened. Germany dragged the world back into conflict—one that eclipsed the previous one, and eventually left Germany in rubble and its people broken.

Japan had been the aggressor in 1941 (and 1937 in China, earlier in Korea). By August 1945, at least 25 million people had been killed in the Pacific War, nearly four-fifths of them noncombatants, and a vast majority of those were not Japanese. Its military proved just as ruthless as Germany’s and its government just as unwilling to surrender and just as willing to put its citizens on the frontlines (the Nazis eventually turned to the country’s youth to fight the invading Allies).

The decision on how to end the war apparently coincided with the objective to not just have Japan accept defeat, but to ensure that its defeat was understood in no uncertain terms. There would be no repeat of a quasi-Germanic resurgence in Japan.

The requisite of unconditional surrender was not some attempt to express American superiority; it was a global necessity.