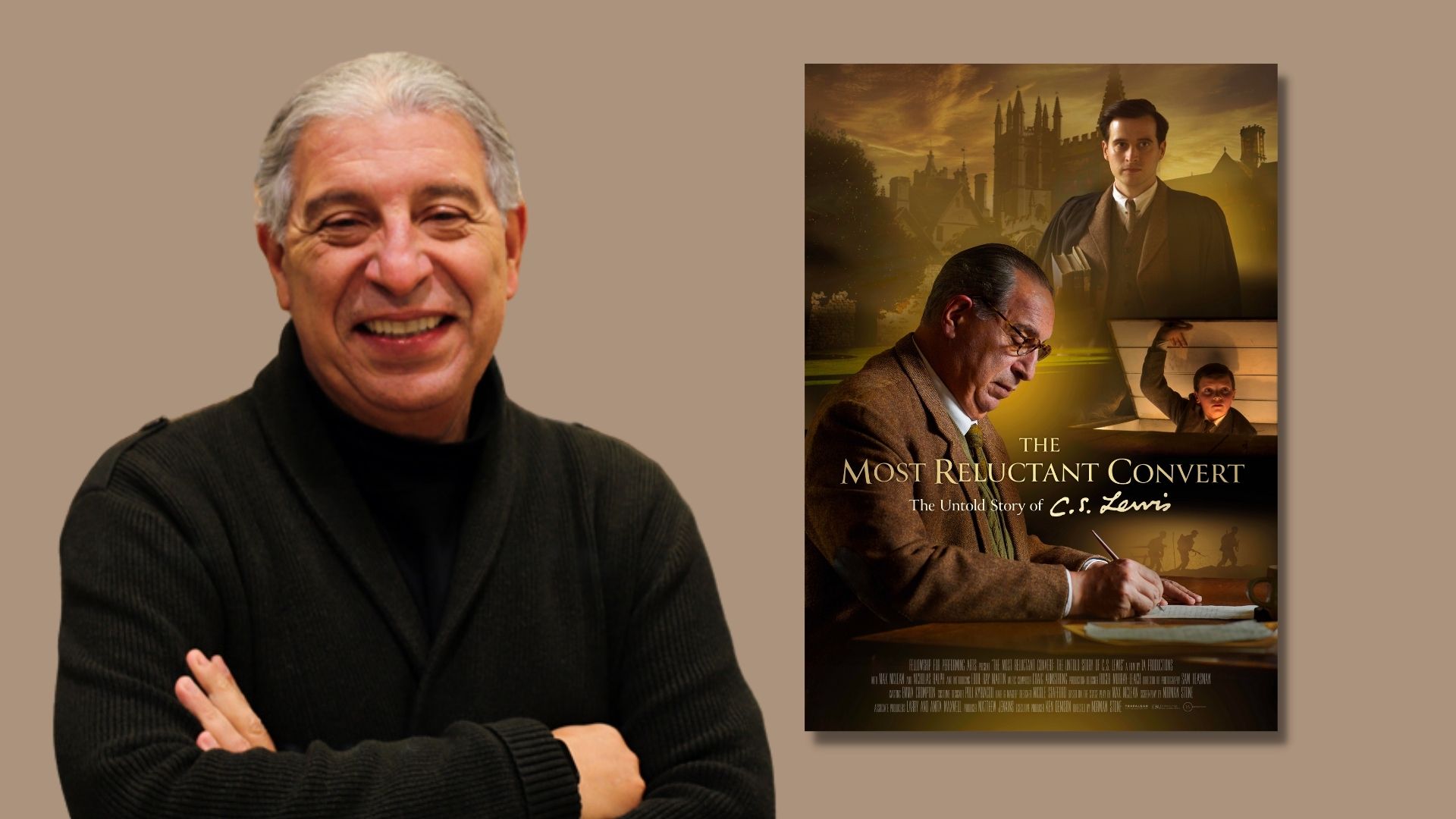 Max McLean on C.S. Lewis and His New Film ‘The Most Reluctant Convert’

For some, disaster brings opportunity. That’s what happened for Max McLean and his stage company, Fellowship for Performing Arts (FPA), which engages audiences through art from a Christian worldview.

It is no secret that McLean has a great affinity for C.S. Lewis. He and his company have turned works by Lewis into stage plays, such as “The Screwtape Letters,” “The Great Divorce,” as well as performing Lewis’s tragic love story called “Shadowlands.” In fact, the moment the country came to a screeching halt on March 15, 2020, Lewis and FPA had just finished a two-week run of “The Great Divorce” in Houston.

As the weeks turned into months, McLean and his company found ways to continue creating and performing. The company performed online events, worked on scripts, and actually managed to reach a larger audience. Then opportunity knocked.

McLean had had conversations with UK director Norman Stone, who had directed the original BBC television version of “Shadowlands,” about possibly turning one of FPA’s most impactful and successful plays into a film: “The Most Reluctant Convert: The Untold Story of C.S. Lewis.” In September 2020, the film industry in the UK reopened for a brief period.

“In June of last year, we were working on the screenplay, and Norman said, ‘You know, they’re opening up filmmaking in Britain in August, and since nobody’s worked since March, I can get a really good crew and a really good cast if we’re ready to go,” McLean said in a recent interview with “The Sons of History.”

“I said, ‘If you can confirm that and make sure that the locations we need are available, I’ll go to my board.’”

Stone confirmed the locations and hired crewmembers who had worked on the films “No Time to Die” and “Murder on the Orient Express.” McLean got approval from the board and obtained the film rights from the C.S. Lewis estate (FPA already had the stage rights). By Aug. 31, McLean was on a plane to London.

“[I] arrived in London, quarantined for two weeks, began shooting in mid-September and finished shooting mid-October,” McLean said. “And here we are, one year later, about to release the film.”

The film hit theaters nationwide on Nov. 3. In the film, three actors play the role of Lewis, covering his childhood to his older years. McLean plays the older Lewis, primarily as the film’s narrator. Eddie Ray Martin plays Lewis as a young boy. Nicholas Ralph plays Lewis as a young man, covering 15 years of his life, including his time as a student at Oxford University, as a soldier in World War I, and throughout the journey of his conversion from atheism to Christianity.

“Norman’s wife saw the first episode, liked it, and we hadn’t cast the younger Lewis yet,” McLean explained. “Norman’s wife said, ‘You should check out this guy, he’s really good.’ Norman did. He called his agent. And he said he would do it. No one really knew if ‘All Creatures’ was going to be a hit or not. They hadn’t even picked up a second season. He was still a relative newcomer with very little attention paid to him. I don’t know if we could get him now, but he was available then [laughs]. He’s been a joy to work with and he’s fabulous in our movie.”

For McLean, playing the role of Lewis on film proved quite different than on stage. For starters, the stage production is a one-man performance with McLean monologuing in a replica version of C.S. Lewis’s study. The film, however, had 15 actors, 190 extras, and was shot in 17 locations. It also required him to shoot parts of the screenplay out of the typical ordered sequence.

Few people are as experienced with Lewis’s works as McLean. Whether on stage or now on film, McLean captures the essence of what made Lewis arguably the most important and impactful Christian of the 20th century: humorous, straightforward, and philosophically complex. McLean has dedicated his life to Christianity and the arts, and has worked to combine the two in a way that is thought-provoking and entertaining.

McLean is hoping viewers of the film will find themselves provoked into thinking about God, Christianity, and the meaning of life. If there ever was a time when people have had time to consider the idea of God, it has been during the pandemic.

“Lewis had a great antipathy to Christianity. He didn’t want anything to do with it. He saw God as this great interferer and all he ever wanted was to be left alone,” McLean said.

“I think people can relate to that. It recognizes our deep desire to pull away from God. I do think that the questions Lewis asks in the film resonate. Christians have their doubts that need to be answered. Many of the reasons unbelievers disbelieve is because no one has really taken the time to answer their questions. Lewis didn’t believe that rational arguments create belief, but he thought the lack of them destroys conviction. He knew that what is proved may not be accepted, but what no one defends is soon abandoned. That’s where things were in Lewis’s day in the ’30s and ’40s, and that’s certainly where we are today.”

Doubtlessly, the pandemic provided an opportunity McLean didn’t anticipate taking until years later. It is also doubtless that McLean and FPA made the most of that opportunity. The film is beautifully shot, well-acted, and highly engaging. It moves well from his childhood to his adulthood, all while an older C.S. Lewis narrates, and at times is present in his own past (a parallel to Dickens’s “A Christmas Carol”).

The movie has a Christian message, but it may be just as applicable to non-Christians as to Christians. The movie presents the understandable struggle of a brilliant man sorting through the idea of God’s existence. As Lewis wrote in “The Problem of Pain,” were he asked to consider whether the universe in which we live—ridden with crime, terror, war, disease—was the work of a “benevolent and omnipotent spirit,” he writes, “all the evidence points in the opposite direction. Either there is no spirit behind the universe, or else a spirit indifferent to good and evil, or else an evil spirit.”

These are deep reflections necessary for every person to ponder, and this is where the story begins.

After watching the film, the viewer is left pondering what McLean calls Lewis’s “big idea.”

“Lewis’s big idea was that there is another world, and that is where we come from,” he said. “Lewis helps me to desire that other world and takes me out of being so bonded to this world. He also has this marvelous line that I quote all the time, ‘If I find in myself a desire that no experience in this world can satisfy, the most probable explanation is I was made for another world.’”