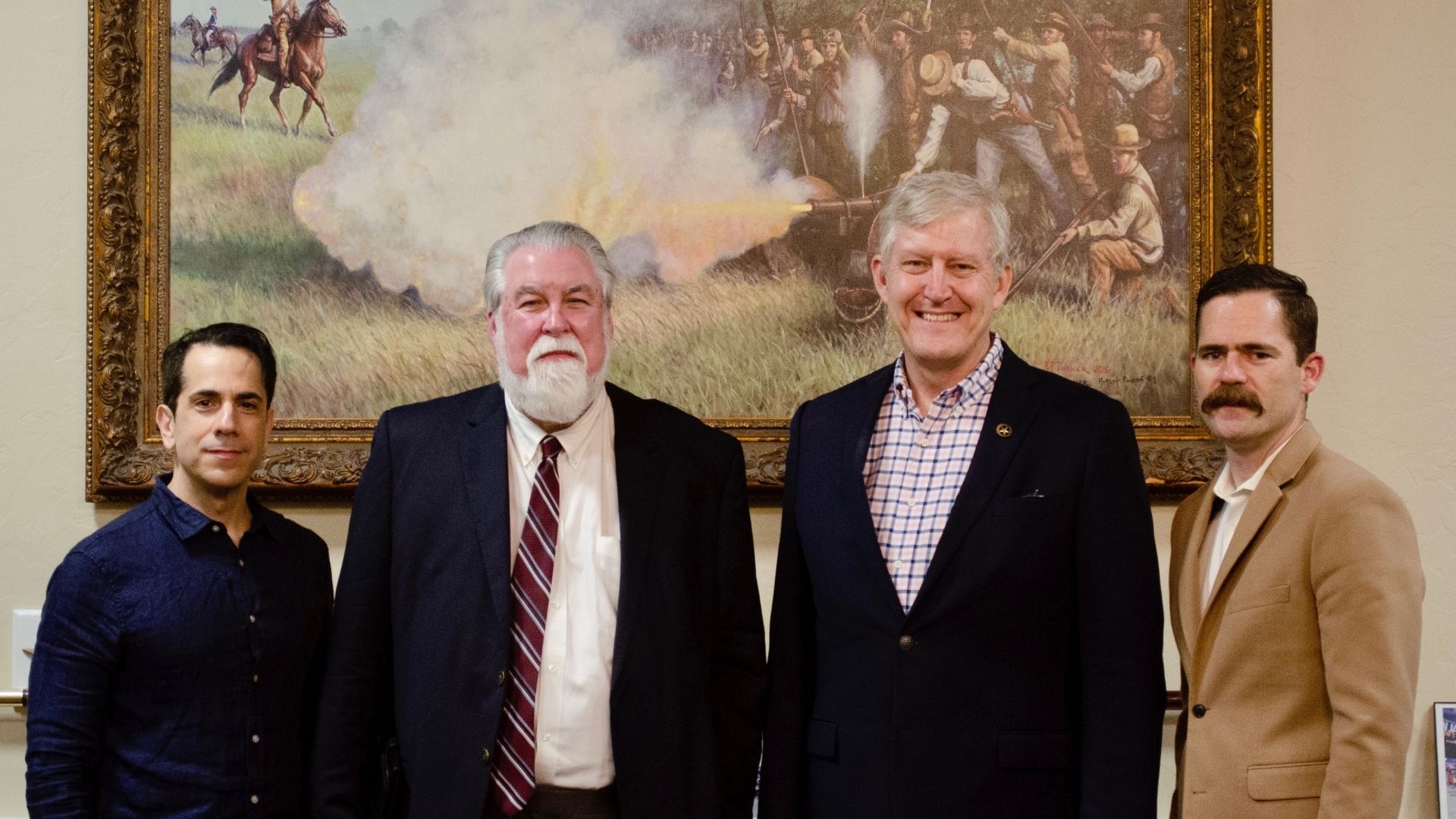 Our First History Event Was A Great Success

We hosted our very first history event on April 17 and it was a true success. But before we get into how the event went, we first need to talk about April 16.

We dodged two major bullets that day. The first was with the hotel where we had booked Dr. Stephen L. Hardin. Dustin had booked the hotel through Booking.com and so all was set and ready to go. While at the bank, he received a phone call from said Dr. Hardin with the news that he did not have a reservation. STRESS ALERT!

We knew that couldn’t be right because the money had changed hands and we had sent the confirmation number and everything over. Dustin talked to the young girl who was trying to help Hardin, while at the same time not being very helpful (God bless her heart). She informed Dustin that there was no one under the name of Dr. Stephen L. Hardin who had a room reservation. She therefore suggested he contact Booking.com, and so he did. He informed Dr. Hardin that he would get the situation straightened, and Hardin took the situation like a saint.

Hardin also had a friend coming along with him, who booked a room at the same hotel: Dr. Jody Edward Ginn (who we recently had on the podcast). When he called Dr. Hardin, he was hanging out with Ginn. In the end, no harm and Hardin had his room.

Dustin had scheduled dinner reservations at a new place in The Woodlands called Whiskey Cake. The reservation had been made for 7:45 pm. Dustin and Alan arrived as Hardin and Ginn were walking up to the restaurant. A quick hello and some small talk later, Dustin went to the hostess stand and informed them his party had arrived. She asked what the party name was. They checked the list, but there was no reservation. Could this really be two snafus within hours of each other? Was this how the entire weekend would be? A comedy of errors.

The fact was Dustin had made the reservation online and had made it for the following night. His throat went right to his stomach. Not to fear. The hostesses were entirely professional - and most likely saw the horror sweep across Dustin’s face - and said it was no problem and that they would have a table in about 5 minutes. What an absolute relief!

The evening ended with all five of us: Hardin, Ginn, Denton Florian, Alan and Dustin having a great dinner and great conversations.

The next morning, we all gathered for breakfast - sans Alan, who could not make it. After breakfast, Denton took Hardin and Ginn to see a statue sculpted by our good friend Craig Campobella (we have a t-shirt of one of his sculptures: Come and Take It!) Dustin headed out to take care of last minute necessities before the event.

Thank You to So Many!

Our event could not have been a success, and in fact, would not have been able to be put on without our sponsors: Tippit Dental Group, Gullo Commercial Services, ECC Consulting, Honor Cafe, Homeland Properties, Bass Construction Services, BassTrapp Media, HM General Contractors, Good Books in the Woods, The American Cookie Company-Lake Conroe, and Vicki Vetere.

It would not have been nearly as great without our fantastic host: The Spirit of Texas Bank, which was, as Hardin wrote on his personal website, “far and away, the most opulent and history-rich venue in which [he had] ever appeared.” We truly cannot thank them enough for allowing us to have our event there.

And without a doubt, the event would have run into so many problems if not for our awesome volunteers: Brandon (Dustin’s brother), Jarred (Dustin’s business partner with BassTrapp Media), Byron, James, Amber, Emily, Kent, Amber, and Kim. (We leave their last names out because...well, privacy.) They worked seamlessly to ensure tables, chairs, food, merchandise, the streaming equipment, and everything else was in its place. They all were godsends!

Speaking of merchandise, we must say thank you to Branding Iron for doing such a wonderful job on our t-shirts and coffee mugs. They were a huge hit. Debbie Krueger was so easy to work with. Also, Peggy Edwards and Telesia Larsen at Printing Plus, who printed all of our flyers and programs, were awesome.

A Night of Texas History

Of course, what good would an event be if not for the fans who came out for the event? We had a great crowd, and we had numerous watching on the livestream.

Dustin was the first to speak at the event to introduce Florian.

Florian gave a most powerful speech concerning the necessity of good character and doing the right thing, even when it is costly to yourself. His inspiration? Sam Houston. Florian is the foremost scholar on the subject of the great Texas hero. His speech tied in the modern day collapses in character that have devastated not simply the person whose character proves to be so flawed, but the many who place their trust in such a person. It was a moving speech, which culminated in how Sam Houston understood history, his place in it, and how history remembers people.

For those wishing to know more about the great Sam Houston, you can purchase Florian’s five-time EMMY Award winning documentary.

Alan took his place at the podium to introduce Hardin.

Hardin gave a talk on the 1836 Runaway Scrape, which had everyone enthralled. The hardships of escaping the ferocity of Santa Anna included being left with hardly anything to one’s name, crossing harsh rivers, losing livestock, enduring hunger, and persevering through absolute weariness. The emotions ran high throughout his talk, but at no time more than when he read the writings of a mother who had lost her son in one of the battles. We dare say there was not a dry eye in the venue at this point in time. It was a moment not to be forgotten.

Before the evening came to a close, we had time for a Q&A session and we had some great questions. We even had questions from our online audience.

We thank all of our guests - in-person and online - for their attendance and their truly inquisitive questions.

The night finally came to an end. We were able to take some photos with our speakers and our volunteers before everyone left.

We are so happy that our event was such a success, but it would not have been possible without the help of so many, and without having such amazing scholars and speakers. The Sons of History hopes to do more of these in the future. We indeed had numerous attendees ask if we would.

Thank you again to all. We are both most appreciative.

The Sons of History