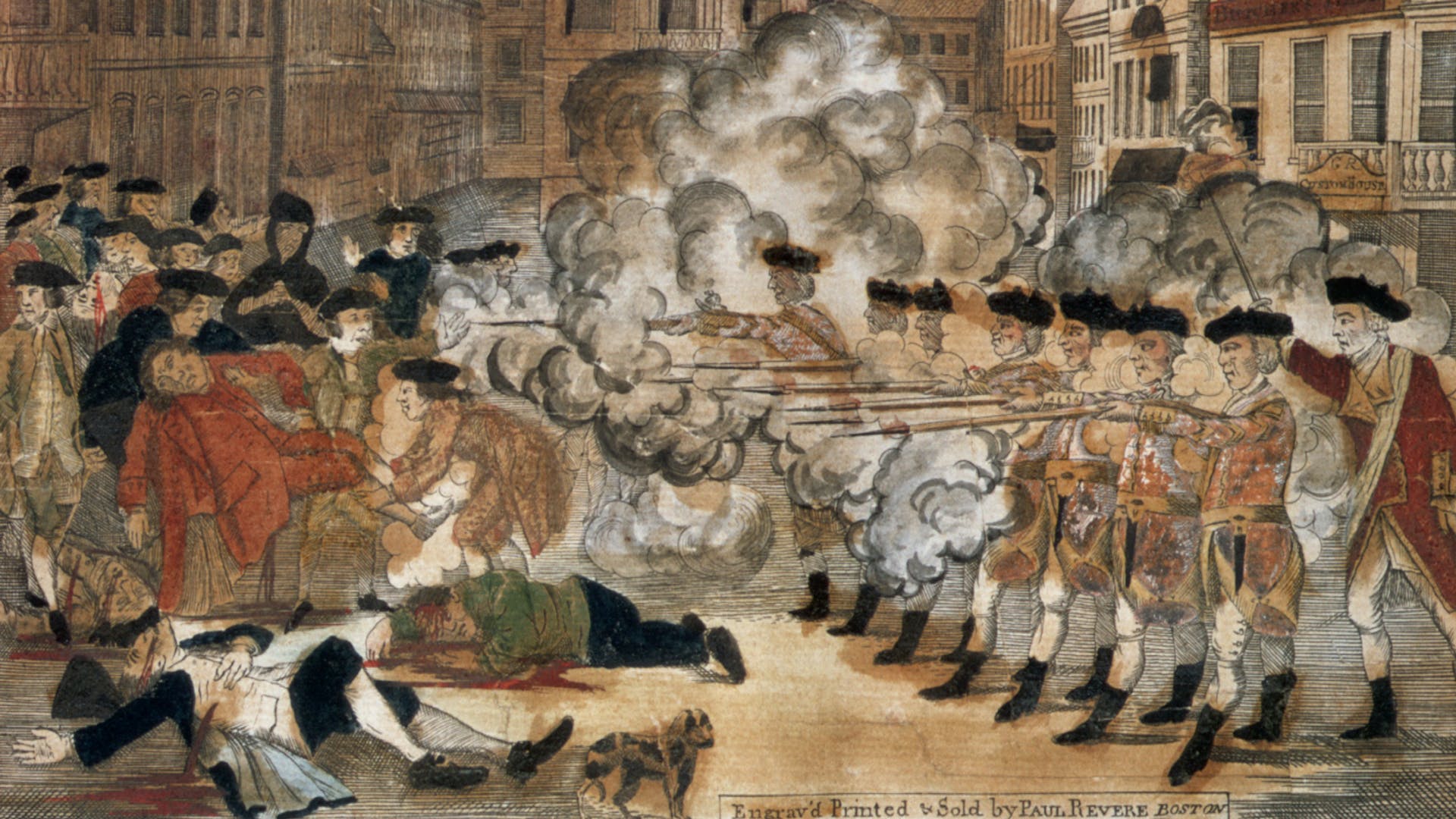 Reflections on the 250th Anniversary of the Boston Massacre

British Redcoats occupied Boston on Oct. 1, 1768, to end the civil unrest that divided the city between patriots led by The Sons of Liberty, and Tory loyalists led by Gov. Francis Bernard, Lt. Gov. Thomas Hutchinson and his brother-in-law Andrew Oliver. Siding with the patriots were the North and South Side gangs, led Samuel Swift and Ebenezer Mackintosh, respectively. Mackintosh later participated in the Boston Tea Party.

At issue were taxes, duties, and mercantile policies imposed upon the American colonists by Britain’s Parliament after the Seven Years’ War (French and Indian War in North America). Because they lacked representation in Parliament, most colonists refused to abide by these new laws and responded with civil disobedience. Merchants purchased smuggled goods, and The Sons of Liberty organized boycotts of all British imports. This created problems on both sides. John Hancock had his sloop, the “Liberty,” seized for smuggling in May 1768, and customs officials were beaten in response. Those who enforced the laws, including Hutchinson and Oliver, had their homes and offices ransacked, and their effigies burned. The chaos that ensued forced Gov. Bernard to contact London and request soldiers to help restore order.

Loyalists felt extreme pride as Englishmen and deeply resented the “ungrateful agitators” for stirring trouble. For them, obeying the king and his ministers was a small price to pay for being members of the British Empire. After the soldiers arrived, loyalists inflicted Victor’s justice upon the patriots. This included the beating of prominent lawyer James Otis Jr. Both sides organized vigilante mobs. After many months, patriots frustrated with the continued occupation, targeted soldiers with taunts and insults. In response to these hostilities aimed at them, the soldiers began acts of reprisals against all Bostonians, refusing to distinguish between the instigators and the innocent. British officers failed in their efforts to de-escalate the growing tensions on all sides.

On Feb. 22, 1770, customs officer Ebenezer Richardson, a known loyalist informer, defended merchant Theophilus Lillie, who refused to join the boycott. Several patriots attacked Richardson after he destroyed one of their signs and chased him home. Stones were hurled through Richardson’s windows, striking his wife. He grabbed his musket, ran upstairs, fired into the crowd, and mortally wounded 11-year-old Christopher Seider. A teen named Samuel Gore was also hit but survived his injuries.

A nearby church bell rang as larger crowds gathered around Richardson’s house. Carrying a cutlass to defend his trapped family, the unrepentant Richardson challenged the gathering lynch mob: “Damn their blood! I don’t care what I’ve done.” William Molineux persuaded his fellow patriots to march Richardson down to Faneuil Hall, where he was charged with the shooting of Seider before a justice of the peace.

A parade of mourners gathered together for what was at the time the largest funeral ever seen in North America. They carried the body of Christopher Seider from the Liberty Tree to the Old Granary Burying Ground.

Phyllis Wheatley, a poet, black slave, and patriot, wrote a poem in young Seider’s memory. She spelled his last name “Snider” as the grave marker and newspapers at the time did.

On the death of Mr Snider
Murder’d by Richardson

The volatility of the situation grew worse after Seider’s death. The presence of so many vindictive soldiers playing an occupying role in a small city filled with contemptuous loyalists and resentful patriots who pushed each other toward violence inevitably turned Boston into a ticking time bomb. Those doing the pushing wanted blood, and they didn’t have long to wait.

On the very cold night of March 5, less than two weeks after Seider’s death, the mood was unmistakably combative as screaming protesters demanded the complete withdrawal of all British soldiers. Groups of patriots armed with clubs rang the church bells and marched through the city yelling, “Turn out! Town born, turn out!”

At the Liberty Tree, a reported 300 gathered in hopes of assaulting any soldier they stumbled upon. Many of the soldiers made no effort to avoid confrontation as they marched through the crowds, swinging their cutlasses at those who came near. A few soldiers threatened with aimed muskets as loyalists encouraged them to shoot. Packs of boys joined in and threw snowballs at the soldiers. Meanwhile, British officers and the Sons of Liberty were doing what they could to diffuse the situation and encouraged everyone to go home.

One unfortunate soldier caught in the middle was Pvt. Hugh White, a lone sentry stationed at the Customs House on King Street near the Main Guard Barracks, and across from the Town House, the seat of the colonial government. Edward Garrick insulted Pvt. White’s company commander for an unpaid wig. In response to the insults and accusation, Pvt. White beat Garrick with his musket and chased him away. This angered many of the witnesses, who now surrounded Pvt. White and called him, “Bloody back! Lousy rascal!”

Within minutes, scores of Bostonians carrying clubs and sticks joined in the ruckus. Pvt. White backed up to the door, loaded his musket and fixed his bayonet as he was hit with icicles and snowballs. The growing crowd screamed, “Kill him! Kill him! Fire! [ … ] You dare not fire!” Terrified, Pvt. White screamed for help.

With the church bells ringing and townspeople screaming at the soldier to fire, more Bostonians poured out into the streets, thinking there was a fire. At the main guardhouse nearby, Capt. Thomas Preston organized a relief party to rescue Pvt. White. The eight of them marched into what was now a packed, dense angry mob whose anger over the prolonged occupation of their city finally spilled over into a riot.

Capt. Preston pushed his way to Pvt. White as the people screamed, pressed in, and tossed snowballs and icicles at all his men, who by now loaded their muskets in full view of everyone. Richard Palmes and Henry Knox pleaded with Capt. Preston not to fire their weapons, lest they be torn apart by the frenzied mob that dared them to fire. A loyalist stood behind Preston’s men, and begged them to fire.

Just then a club was thrown at Pvt. Hugh Montgomery and knocked him down. He got up and fired his weapon without being given the order from Capt. Preston. His shot hit no one. The stunned crowd drew back in silence. Then, the other soldiers fired sporadically into the crowd. Samuel Gray was shot in the head. Crispus Attucks took two rounds in the chest. Some in the crowd thought the victims who fell dead were just fainting while others yelled for the people to advance on the soldiers. More shots were fired as James Caldwell and Patrick Carr were fatally struck. Samuel Maverick was running away when a bullet ricocheted and struck him in the chest. Six more were shot but survived. The anger, the pushing, the dares had finally reached a climax. When the smoke cleared, Capt. Preston surveyed the scene before him as men lay dead or dying in the snow-covered streets and fully understood the magnitude of what just took place.

Today the great nation created in large measure by the efforts and sacrifices of the Sons of Liberty faces similar hostilities, tempers, and intolerance between political foes seen 250 years ago. Whether it’s antifa in Portland, alt-right in Charlottesville, a cop-killer in Dallas, a left-wing fanatic shooting Congressman Steve Scalise, or venomous fights between friends at dinner tables or on Facebook, Americans are divided, and the rifts continue to grow. Under similar conditions we as a people and nation face today, Spain fractured in 1936 and suffered three years of civil war. If we as Americans can’t learn from history and live together amicably, we may find ourselves reliving the same nightmare.