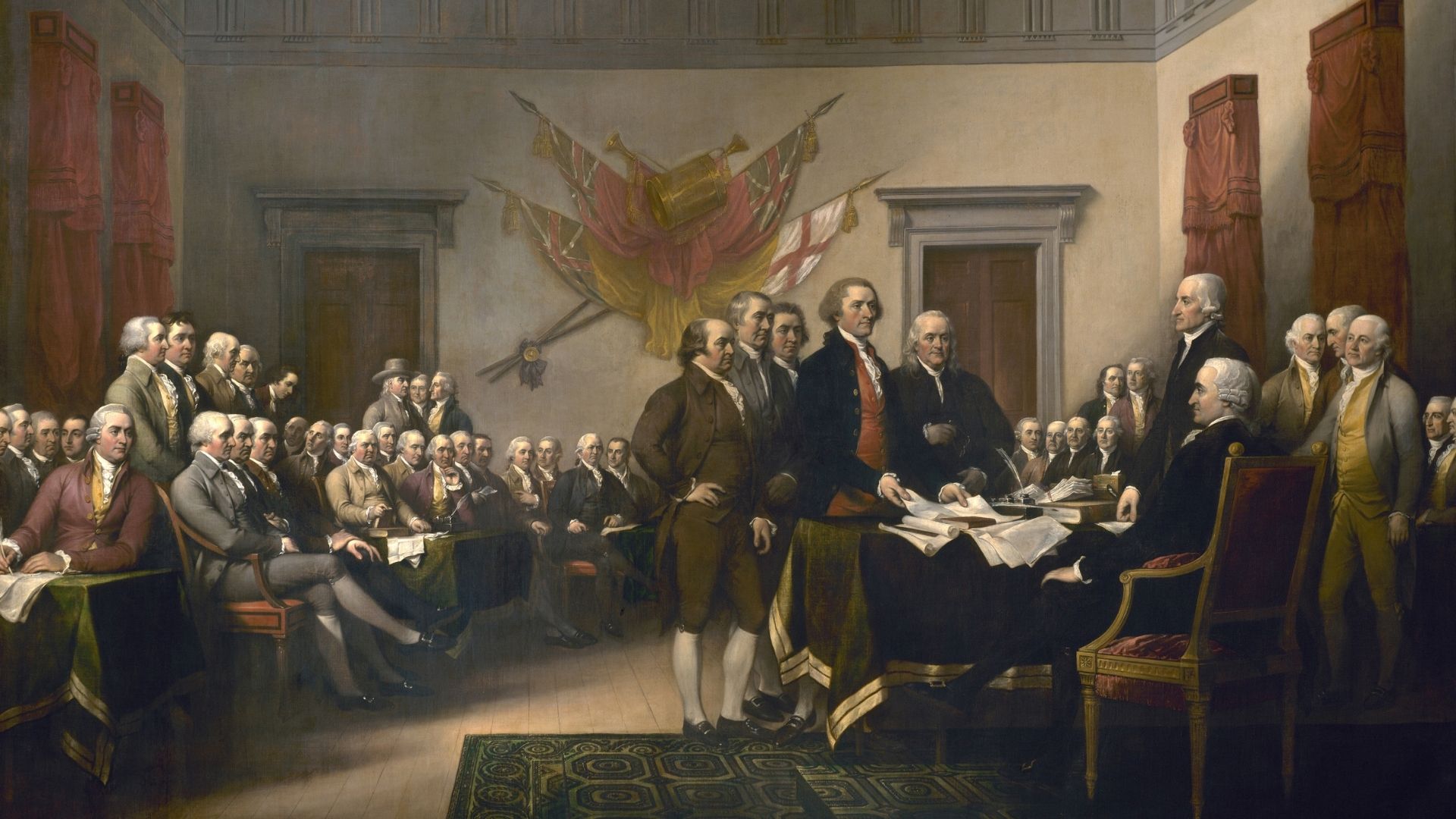 The Story Surrounding the Declaration of Independence

The Declaration of Independence was not a simple matter of signing a piece of paper and celebrating afterwards with fireworks. First - we were at war with Great Britain - the greatest superpower in the world – because the colonists had resisted the tyranny imposed upon them from London.  Second - there was opposition among the delegates over the course of action in response to British tyranny.  Richard Henry Lee’s Resolution for Independence had to be passed unanimously. The day before the vote was taken on 2 July, the delegates of only nine colonies supported independence. Even before hostilities commenced at Lexington, very few Americans gave thought to the idea of independence. They enjoyed the protections and privileges that came with being part of the British Empire. Most Americans simply wanted Parliament to back off, respect their autonomy, and honor both the rights protected by the ancient English laws and the charters signed between the colonists and the British Crown. Much of that changed however when Thomas Paine anonymously published “Common Sense” in January 1776.

After the Boston Tea Party in December 1773, the thirteen colonies found themselves under siege by British military forces. Parliament set about to punish those New England insurrectionists who dared challenge their authority. The Quebec Act and the Coercive Acts (aka The Intolerable Acts)  – which included a blockade of Boston Harbor – were meant not only to break the will of the rebels – but also to serve as a warning to the rest of the colonists of British North America that they’d better behave and submit to British authority.

The following events took place before the Declaration of Independence was signed:

• The first shots were fired at Lexington. The fighting escalated at Concord and Menotomy (modern town of Arlington, Massachusetts).

• Delegates from thirteen colonies met in Philadelphia for the Second Continental Congress.

• Battle of Machias: - a naval battle where the Patriots captured the armed sloop HMS Margaretta.

• Nominated by Massachusetts delegate John Adams in Philadelphia, George Washington is appointed Commander in Chief of the Continental Army.

• Battle of Bunker Hill (on Breed’s Hill) led to over 1500 casualties – a vast majority of the them British.

• The Continental Congress adopted the Olive Branch Petition which appealed directly to King George III. That appeal was not only rejected by King George III, but a proclamation was issued that declared the colonies in a state of treason and open rebellion.

• Patriots were besieged by the British at Ninety-Six, South Carolina.

• Benedict Arnold was severely wounded, Daniel Morgan was taken prisoner, and Richard Montgomery was killed trying to take Quebec City in the middle of a heavy snowstorm.

• British Royal Navy bombarded Norfolk, Virginia - after Royal Governor Lord Dunmore and his loyalists were driven out of the city.

• Thomas Paine wrote “Common Sense”. This pamphlet planted the seeds of independence into the minds of Americans throughout the thirteen colonies.

• British and loyalist forces evacuated Boston after the Continental Army occupied and fortified Dorchester Heights IN ONE NIGHT with artillery Henry Knox had transported from Fort Ticonderoga.

• France and Spain agreed to assist the colonists with clandestine support. The two nations were at peace with Great Britain and intended to stay that way until they were prepared for war.

• Richard Henry Lee introduced Lee’s Resolution for Independence to the Second Continental Congress. Congress adjourned to receive instructions. The Committee of Five was set up.

• The Continental Army failed to take to Trois-Rivières in Quebec from the British.

• British reinforcements retook Quebec and pushed the Continental Army out of Canada. Benedict Arnold was the last American to leave.

• The Battle of Sullivan’s Island. The British Royal Navy arrived off Charles Town, South Carolina (modern day Charleston) in a show of force. They invaded Sullivan’s Island and bombarded its fort. The Americans successfully repelled both attacks and defeated the British. One British frigate was lost and four more damaged.

• The Committee of Five presented the Declaration of Independence to John Hancock and Congress.

• British agents incited the Cherokee to attack Americans along the entire southern frontier.

As the delegates of the Second Continental Congress debated Lee’s Resolution for Independence in Philadelphia, the largest British expeditionary force ever assembled sailed through the Narrows and arrived in New York Harbor in a massive show of force that not only astonished George Washington and his generals, but put the fear of God in every New Yorker and armed Patriot who witnessed the spectacle. For the next six weeks more ships arrived – including those that attacked Sullivan’s Island. Under the command of General William Howe and his brother Admiral Lord Richard Howe, the British armada consisted of:

This British expeditionary force was better-trained, better-equipped, and better-led than the estimated 19,000-man Continental Army. They landed unopposed on Staten lsland.

While Washington ordered construction of fortifications throughout the city to respond to the threat they faced, word reached the Continental Army that independence had been declared. Celebrations took place – but under the dark cloud of impending battle with a much larger and more powerful enemy.

The Howe brothers did not want war with the Americans – especially since Americans had honored and revered their brother George Augustus Howe, who was killed in the French and Indian War. But they were tasked with a duty – which was to end the rebellion against the British Crown - and they were determined to fulfill that obligation. They tried at first to do so with peaceful negotiations – but in doing so refused to address George Washington as a general. Washington took this as an insult. Eventually, there was a discussion between the two sides – but the talks ended when the Americans refused the British demand that they renounce independence and submit to British authority.

Following the Declaration of Independence, the following events unfolded:

• Indian and British attacks escalated throughout the southern frontier.

• The Continental Army was trapped at Brooklyn Heights with their backs to the sea. Washington ordered a silent retreat – under the cover of darkness - across the East River to Manhattan.

• As the sun was about to rise and expose the Continental Army as they retreated – a thick fog rolled in, covered the area, and reduced visibility enough to keep all the evacuees hidden.

• British and German forces invaded Kip’s Bay and captured the southern half of Manhattan. The Continental Army was routed as they fled north to Harlem.

• The Continental Army repulsed a British attack during the Battle of Harlem Heights.

• New York City is engulfed in flames. Loyalists accused the patriots of arson.

• American spy Nathan Hale was captured and hanged without trial. His last words were, “I only regret that I have but one life to lose for my country.”

• The Battle of Valcour Island – Benedict Arnold’s makeshift navy is defeated in Lake Champlain – but they successfully stalled the British Navy long enough to postpone the British and Canadian invasion of New York until the following year.

• The Continental Army evacuated Manhattan (except for Fort Washington) and moved north along the North River (aka Hudson River).

• Newport, Rhode Island is captured by the British.

• The Continental Army retreated across New Jersey and crossed the Delaware River into Pennsylvania. The American Revolution was on the verge of collapse. Militia units abandoned the war.

• Congress – and many within the Continental Army – lost confidence in Washington’s abilities to continue the war.

• Thomas Paine published “The Crisis”. The pamphlet appealed to all Americans to continue fighting and not give up the war.

"The Crisis" began with the following inspirational paragraph – which was read to the Continental Army by orders of George Washington:

“THESE are the times that try men's souls. The summer soldier and the sunshine

patriot will, in this crisis, shrink from the service of their country; but he that stands

it now, deserves the love and thanks of man and woman. Tyranny, like hell, is not

easily conquered; yet we have this consolation with us, that the harder the conflict,

the more glorious the triumph. What we obtain too cheap, we esteem too lightly: it is

dearness only that gives everything its value. Heaven knows how to put a proper

price upon its goods; and it would be strange indeed if so celestial an article as

FREEDOM should not be highly rated.”

British and German forces occupied New Jersey and set up outposts along the Delaware River. The Continental Army in Pennsylvania was reduced to only 5,000 men… and their enlistments were set to expire at the end of the year. The Revolutionary War – and with it freedom, independence, and all the ideals of the American Revolution - appeared lost. But George Washington thought otherwise as he was not about to quit. He reconnoitered the Hessian outpost in Trenton, New Jersey and came up with a bold plan... a gamble that passionately inspired all Patriotic Americans and determined the outcome of the war.

American independence was a monstrous struggle that cost an estimated 23,000 to 24,000 American lives due to combat, starvation, and disease. The Declaration of Independence was signed by condemned, wanted men. Had they been caught by the British – they’d have been hanged. Just like the rest of their countrymen, most of the signers lost much – some lost everything. And it was signed during a war that started fifteen months earlier. It took another seven years of battles and sacrifice which escalated into a World War when France, Spain, the Netherlands, and Mysore joined the American cause – before the thirteen United States finally won and secured its independence… and with it - its FREEDOM.