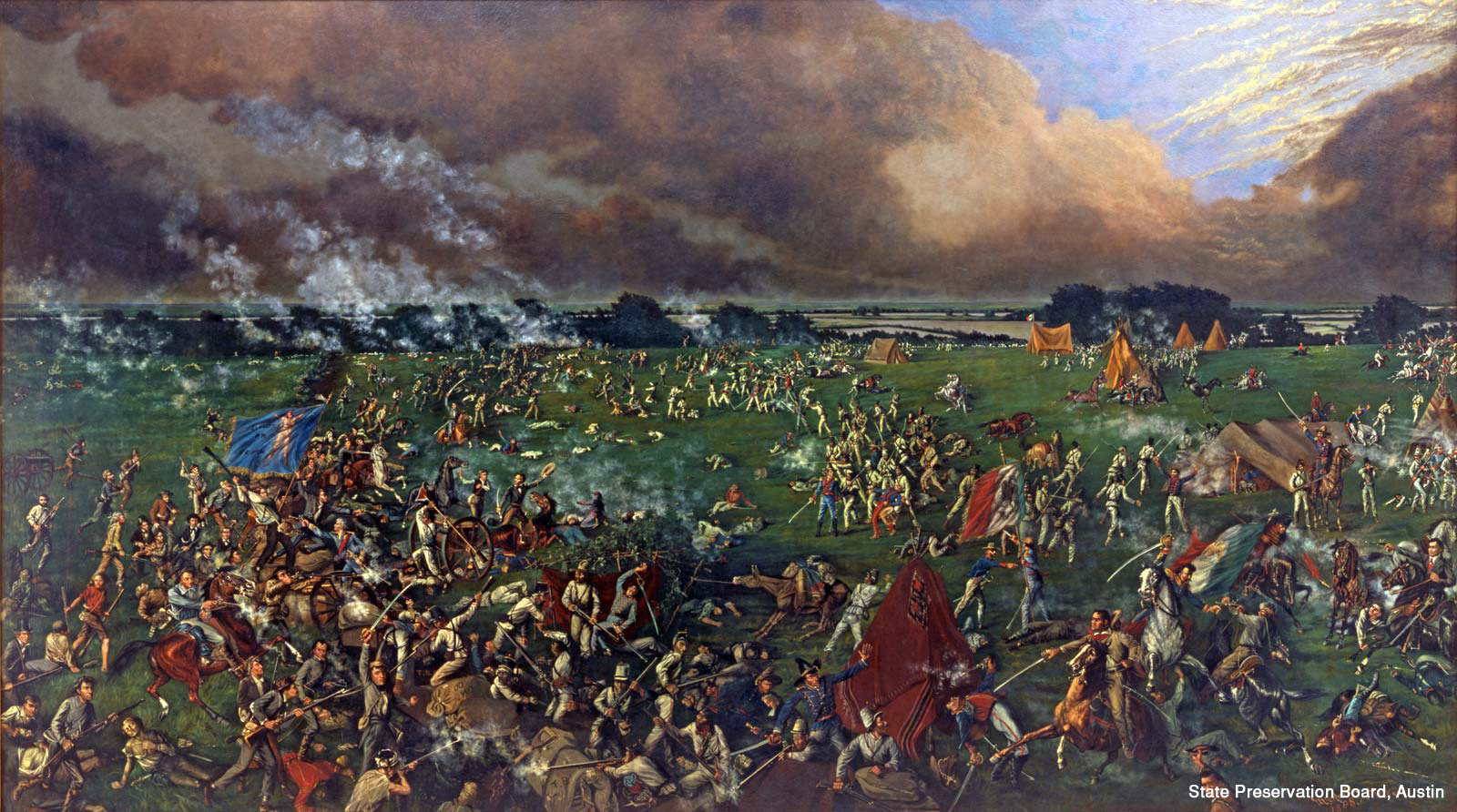 In the late afternoon of April 21, 1836, Gen. Sam Houston sat on his stallion Saracen as his Texian Army slowly marched for battle in two parallel lines near Lynch’s Ferry.

Ahead stood a rise covered in tall grass that stretched across the whole field and concealed their approach. Erastus “Deaf” Smith suddenly appeared on their right flank, astride his horse, and yelled, “Vince’s Bridge is down!” All routes of entry or escape from this battlefield were destroyed.

The men faced only two choices: victory or death!

At 4:30 p.m., the two four-pounder cannons known as the “Twin Sisters” fired the first shots of the Battle of San Jacinto, the final climactic engagement of the Texas Revolution. Future Texas President Mirabeau Lamar and his mounted riflemen charged the Mexican left flank while a Texian band played “Will You Come to the Bower?” The infantry fired a single volley before Gen. Thomas Rusk ordered the men to immediately charge and attack the enemy before they had time to organize their lines.

Screaming, “Remember the Alamo! Remember Goliad!” the advancing Texians swarmed the camps and breastworks of the startled and weary Mexican soldiers.

What followed was a complete rout that sowed the seeds for a future war between the United States and Mexico and culminated in America fulfilling its Manifest Destiny.

Since the beginning of time, powerful nations the world over initiated policies of expansion and colonization. After 1492, Spain, Portugal, Holland, France, and Britain vied for control of the New World as they colonized the Americas. Spain possessed a vast empire that stretched across both North and South America. Slowly, they began to lose their colonial possessions.

When France sold Louisiana to the United States in 1803, a dispute began with Spain over the territorial boundaries. With the signing of the Adams-Onís Treaty in 1819, the dispute was finally settled. Two years later, Mexico declared its independence from Spain, installed an emperor, and established its own empire out of the former Spanish Viceroyalty that stretched from the modern-day Panama-Costa Rica border in the south, to the modern-day California-Oregon border in the north.

Texas was a barren land with no infrastructure. In 1821, there were 2,000 Tejanos living in the run-down villages of Bexar (San Antonio) and La Bahia (Goliad). Forty thousand Indians from 31 tribes also lived in Texas and frequently raided areas across Mexico. The government couldn’t control these hostile Indians.

When Stephen F. Austin petitioned Texas Gov. Antonio Martinez to establish an Anglo-American colony in Texas, Martinez agreed to the request, assigned Austin the title of Empresario and granted him lands for 200 families. Mexico had other motives for granting Austin’s request. They wanted the Indians tamed or defeated, and more importantly, westward expansion of the United States blocked.

A thriving Texas would accomplish both.

Between 1821 and 1824, political developments in Mexico would have a lasting impact on future events as a power struggle ensued between centralists and federalists. Emperor Agustín de Iturbide was forced to abdicate, and the Central American states seceded from Mexico. A provisional government was formed and drafted a federalist constitution. Centralists began fomenting trouble. What followed was decades of uprisings, riots, rebellions, civil wars, coups, and wars of secession.

Those who believed in monarchy, aristocracy, Roman Catholicism as the established religion, and the educated upper class controlling the reins of a strong central government were centralists. Those living in or near Mexico City were typically centralists. They feared giving power or voting rights to the illiterate masses, most of whom were Indians or mixed races. Centralists excluded the lower classes from government positions.

Those who believed in universal male suffrage, autonomy for the provinces, secularism, democracy and congressional representation were federalists. They despised the privileged elite, many of whom were Spaniards. Federalists passed laws to remove elitists from power, confiscate their wealth, and deport or exile Spaniards living in Mexico. Those living in the outlying provinces, including Texas, were typically federalists.

For the next decade, Texas grew and prospered while Mexico languished from internal strife. The Anglo-American population exceeded 20,000. Austin pleaded with Mexican authorities to assist in their commercial enterprises. Infrastructure between Texas and Mexico was badly needed. Ports along the Gulf Coast needed to be built and expanded.

The authorities agreed but couldn’t initiate the requests for two reasons: lack of funds and government instability. Texas had no choice but to expand its commercial ties with the United States, which greatly worried Mexico.

Mexico further crumbled as its leaders feared the growing power of Texas and its reliance on America. A boundary commission sent to inspect Texas in 1827 greatly alarmed its members. While the Anglo population greatly expanded in numbers and their colonies flourished far beyond their expectations, the Tejano villages were left dilapidated and under constant siege by the Indians. Harsh recommendations were made to prevent Texas from seceding, and laws were passed in 1830 restricting immigration from the United States. These and other laws further alienated the Anglo-Americans in Texas.

In a costly move that added fuel to the fire, Stephen F. Austin, the ever-loyal Mexican citizen who always defended the government, was falsely accused of treason in 1834 and imprisoned in Mexico City.

American politicians, diplomats, journalists, and businessmen increased Mexico’s anxieties when they called for the annexation of Texas. U.S. diplomats sent to Mexico City offered to purchase Mexico’s northern states. Those offers were bitterly rejected by the Mexicans.

It was during these tumultuous years that Gen. Antonio López de Santa Anna, a wealthy federalist who proclaimed himself the “Napoleon of the West,” emerged as the country’s best hope for leadership and stability. Spain hadn’t recognized Mexico’s independence. When it invaded Mexico in 1829, it was Santa Anna who successfully led the attacks that resulted in victory. He was a national hero who fought to preserve the federalist system. Seen as the savior of Mexico, he was elected president multiple times.

Once in office, Santa Anna often abused power by persecuting his opponents, and consolidating his own power with a centralist system. When he revoked the 1824 Constitution and replaced it with his own “Seven Laws” in 1835, several Mexican states openly rebelled, most notably Yucatan, Zacatecas, and Texas. In May of that year, Santa Anna led an army into Zacatecas and ruthlessly annihilated the insurgency.

Stephen F. Austin was released from prison and departed for Texas in July of 1835. He felt betrayed by Mexico, which changed his attitude towards Texas’s future. He now supported the insurgents who advocated rebellion against Santa Anna and his centralist government.

‘Come and Take It’

The Mexican Army in Texas made efforts to strengthen their position against the hostile Tejanos and Anglo-Americans. Soldiers departed Bexar (San Antonio) for Gonzales and demanded the surrender of a cannon they possessed. The people refused, and on Oct. 2, fired their rifles and cannon at the soldiers. A flag that displayed a star and cannon was unfurled with the words: “COME AND TAKE IT.”

The first shots of the Texas Revolution had been fired.

Santa Anna was outraged. He mobilized the Mexican Army and personally led them into Texas to crush the rebellion. His army captured Bexar in February 1836 and laid siege to the Alamo. Among those trapped were Col. William B. Travis, Capt. Juan Seguín, Col. Jim Bowie, and David Crockett. Seguin was tasked with slipping through enemy lines with Travis’s letter to Gen. Sam Houston. Texian leaders held an emergency meeting in the town of Washington-on-the-Brazos.

Before Santa Anna’s invasion, the Texians wanted autonomy within a federalist system and the restoration of the 1824 Constitution. With the open war now being waged against them, the Texians voted for independence on March 2. Four days later, the Alamo fell, and Santa Anna ordered the murder of all captured Texian soldiers. The same fate awaited the Texians who fought at Goliad. On Palm Sunday, the captured soldiers were marched outside of town and slain.

Santa Anna chased the Texians across southeast Texas. Fleeing residents burned everything they couldn’t carry in what came to be known as the Runaway Scrape.

Houston’s 910-man force consisted of farmers, frontiersmen, militiamen, former U.S. soldiers, American and European immigrants, and Seguín’s Tejanos. Houston knew his untrained, undisciplined men were no match for the Mexican Army. He trained them during the retreat and baited Santa Anna deeper into Texas, farther from his logistics and supplies, and closer to the Texas-U.S. border.

Houston’s men were ashamed of the retreat and wanted no part of it. They preferred to stand their ground and fight. By mid-April, they were on the verge of mutiny and accused Houston of cowardice. Although he wanted to continue eastward and provide additional training to his men, Houston was told he’d be relieved of his command if he retreated any further.

He settled his army near modern-day La Porte and pitched camp in a position he believed provided the best advantage. Behind them and to their left were marshlands surrounded by the San Jacinto River and Buffalo Bayou. Protecting their right flank were his mounted riflemen.

When Santa Anna arrived, he also positioned his camp near marshlands surrounded by water. Both armies were only 500 yards apart.

On April 21, Santa Anna expected an attack at dawn that didn’t materialize. Later that morning, Cos, the same man who surrendered the Alamo in December with the promise never to return, arrived to strengthen Santa Anna with 500 soldiers, all of whom were exhausted and hungry from the long, forced march. Santa Anna’s force numbered 1,250, and an additional 1,000 soldiers led by Gen. Vicente Filisola were expected to arrive.

Houston was well-aware of the expected reinforcements, due in large measure to the capture of a Mexican courier three days earlier. Maj. Lorenzo de Zavala Jr. translated the dispatches that revealed Santa Anna had split his army and that he personally led only a small force. Houston knew an attack must be made before Filisola and his reinforcements arrived. To prevent that, Houston ordered Deaf Smith to destroy Vince’s Bridge. Once completed, nobody would be able to get in or out of the battlefield.

It was now late afternoon. A council of war voted to fight that very day.

Houston instructed Seguin’s Tejano force who were eager to avenge friends and family killed at the Alamo to place cardboards in their hatbands so that in the confusion of battle they would not be mistaken for the enemy.  The late afternoon shadows stretched across the field, the Twin Sisters were placed in the middle, and the men prayed. The time came for the final showdown.