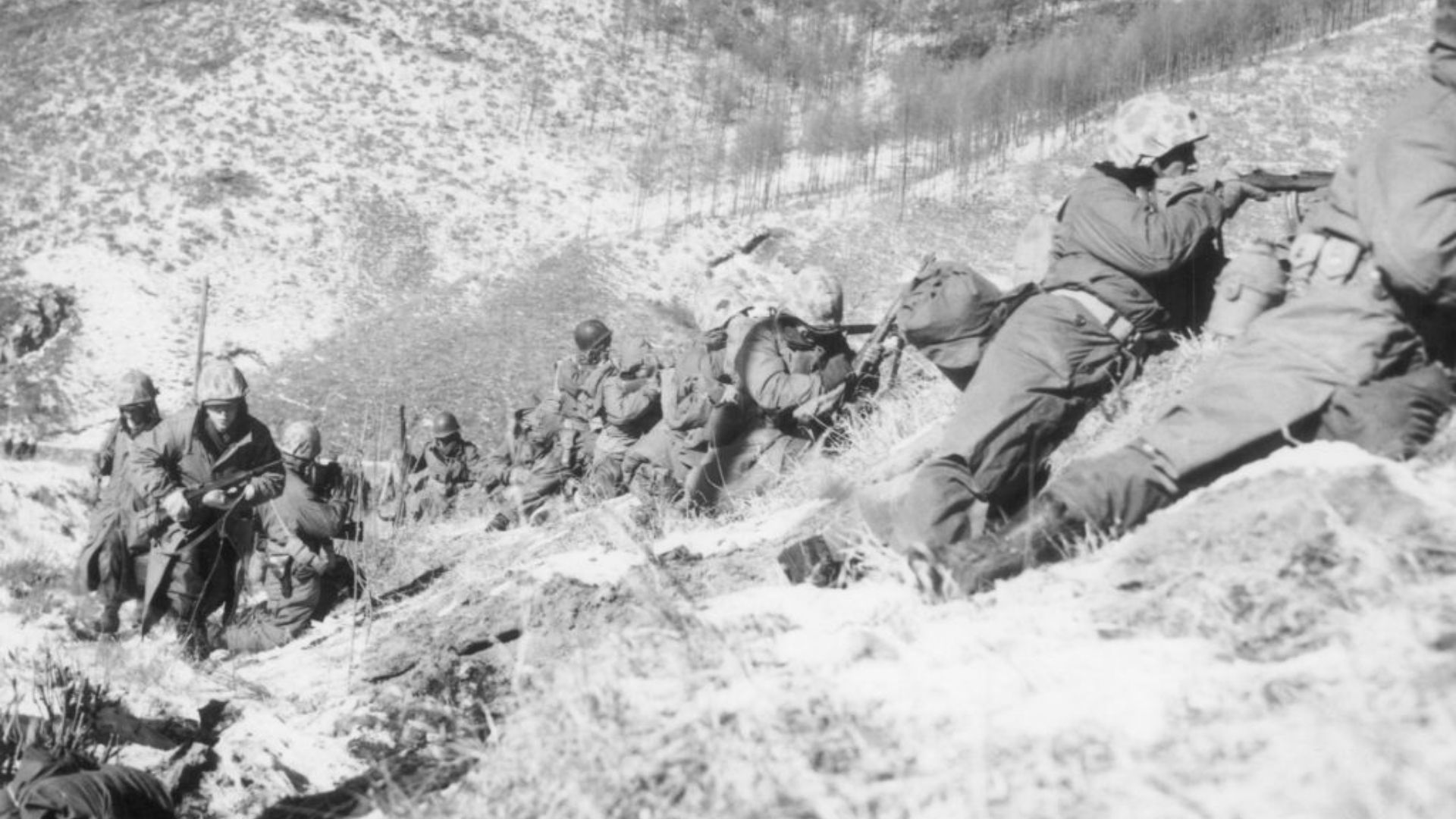 The Undeniable Importance of the Korean War and Its Lessons

Whether Americans or citizens the world over wish to remember or not, the Korean War is the symbol of the 70-plus-year war of attrition between two ideas: communism and democracy. June 25, 1950, moved the world from modern warfare into the existential warfare of the modern age, introducing the first hot war of the Cold War.

The Korean peninsula provides the world a precise cross-comparison of the effects of freedom or tyranny. She is, ironically enough, geographically split in half.

The Democratic People’s Republic of Korea (DPRK) is a republic in name only. This nation, led by the Kim Dynasty, promised freedom and equality but was founded on force and subjugation. Any new nation arising from the chaos of revolution often forgets what it has promised, or, at times, simply cannot fulfill its promises until opportunity allows. In the past 75 years, however, North Korea’s rule has passed from one son to the next.

It took decades for the Republic of Korea (ROK) to find its footing and fulfill the promise of what a republic should be. On paper, when it comes to leaders, North Korea is the symbol of stability, averaging one every 25 years. Between 1948 and 1987, not one South Korean president left office voluntarily. They were either exiled, kicked out, or assassinated. The people, from the top down, however, continued to believe in the promise of democracy—that people could be free to decide their own fate.

The 38th parallel should not be a symbol solely for Koreans of what could be—for better or for worse—but should be a symbol for Americans and yes, even the world. The modern-day American perhaps knows little to nothing about the Korean War, for it’s a moment abandoned by the history books. Despite that, aside from World War II, the Korean War is quite possibly the most important war fought in the past 100 years.

A Brief History of Korea

Korea is a nation with a rich history, founded over a millennium ago. Though a longtime tributary state of China, it remained an autonomous, self-sustaining, and peaceful country. Even during the reign of the Mongol empire, while remaining defiant, it simply transferred its tribute from the Chinese to the Mongols. It had one war with Japan in the 16th century.

As the world continued its push toward a global economic system, isolationism was coming to an end. Nations of the Far East were being broken open by the Western powers. Japan would use American methods with extreme discretion to break open Korea. It established unfair treaties, infiltrated the culture, cut off other competing powers through the Sino–Japanese and Russo–Japanese wars, annexed, and eventually colonized Korea in 1910. By 1939, two years after the start of the Second Sino–Japanese War, Korea was installed as part of the empire of Japan.

It wasn’t until the end of World War II in 1945 that Korea became free. But in practicality, this freedom was in name only. The peninsula had been haphazardly split along its 38th parallel by the Americans and Soviets, ultimately establishing two separate countries. The leaders, South Korea’s Syngman Rhee and North Korea’s Kim Il Sung, were authoritarians who craved unification by any means necessary. Those means came to their ends when the communists of the North attacked in the early Sunday morning hours of June 25, 1950.

The Lessons of War and War Preparedness

The Korean People’s Army (KPA) had the element of surprise, but more importantly, the Soviets, led by Joseph Stalin, continued to provide training and military equipment, including jets and tanks.

The South was stunned and ill-prepared, not just because of the surprise attack, but because the Americans, concerned about an invasion by the South Koreans, limited their military provisions. By June 28, Seoul was in the hands of the KPA, and the mass evacuation of civilians and retreat of soldiers had begun.

Despite intelligence from the ROK and the CIA pointing toward an imminent attack, it was disregarded out of hand as an impossibility. Far East Commander (FECOM) Gen. Douglas MacArthur categorized the intelligence as F6—the lowest threat possible.

Furthermore, the Truman Administration, under the direction of Secretary of Defense Louis Johnson, shrank the military from its 1945 levels of 12 million to 1.6 million, and its budget from $82 billion to $13 billion. American leadership seemed to view the rest of the world as just as unwilling to engage in a war as it was. It ignored, at least for a short period, the universal truth long established by the Romans that “he who desires peace, should prepare for war.”

Until the U.S. could deploy troops from Japan and America, all its tactical maneuvers were delaying actions. The first American force to confront the KPA on July 5 was a battalion of the 21st Infantry totaling 404 men. This battalion, as well as most of the U.S. military at that time, was ill-equipped and ill-prepared to fight. Many soldiers had never seen combat, and the weapons were not on par with what the Soviets had provided. They possessed limited amounts of ammunition, their rocket launchers were incapable of piercing the T-34 tanks, and they had no anti-tank mines. Of the 404 soldiers, nearly half were killed or went missing.

The United Nations Unite Against Communism

As the KPA continued its push to the sea, the nations of the world rose up in defiance of the invading army, but also in defiance of the invading ideology. The free nations—long free and recently freed—feared the encroachment of communism on their own shores and had been fighting a Cold War for five years to keep it from spreading. President Harry S. Truman had vowed to assist democratic nations by every means possible to resist the spread of communism.

The Korean conflict was the physical altercation the world needed to prove how far it would go to stop its spread. The United Nations, perhaps because of its newness or the absence of Soviet representation, fully advocated military action. It was the first time troops were sent to fight under the flag of the U.N. The U.N. had adopted the Truman Doctrine, and it was America—as would become commonplace—that would lead the fight.

Nearing annihilation, the ROK, American troops, and soon the U.N. troops, held off the communist invaders for six weeks at the Pusan Perimeter. When MacArthur’s brilliant Inchon Invasion succeeded, the war turned. The KPA began its massive retreat north of the 38th parallel.

The pursuit of the enemy combatants was understandable, yet proved fatal. MacArthur, looking back on Task Force Smith, called it an “arrogant display of strength.” Ignoring the Chinese threat along the Yalu River was just as arrogant, if not more. The Chinese attacked by the hundreds of thousands, pushing the U.N. troops south of the 38th Parallel. Within the span of three months, the ebb and flow of the war placed the KPA and the U.N. at the threshold of ultimate victory. A stalemate would then occur for the next two years.

Dwight D. Eisenhower would become president on Jan. 20, 1953. Stalin would die March 5. The armistice would be signed July 27. And the two Korean countries would return to their previous line of demarcation.

The two nations continue their standoff, often fighting skirmishes or suffering assassinations, but ultimately keeping an eye on each other across the 38th parallel.

The standoff between democracy and communism is no different. The proverbial line in the sand and threat of encroachment remains. The Cold War never ended; it simply changed hands from the Soviets to the Chinese. If one wonders what it will take to fend off communism, the Korean War is the prime example. It may not end in victory—ideas are rarely eradicated—but it will be worth the fight, even if few remember it.

On the subject of the Korean War, I recommend the following books:

“The Korean War” by Max Hastings
“This Kind of War” by T. R. Fehrenbach
“The Darkest Summer” by Bill Sloan
“The Coldest Winter” by David Halberstam
“The Korean War” by Bruce Cumings
“The Last Stand of Fox Company” by Bob Drury and Tom Clavin