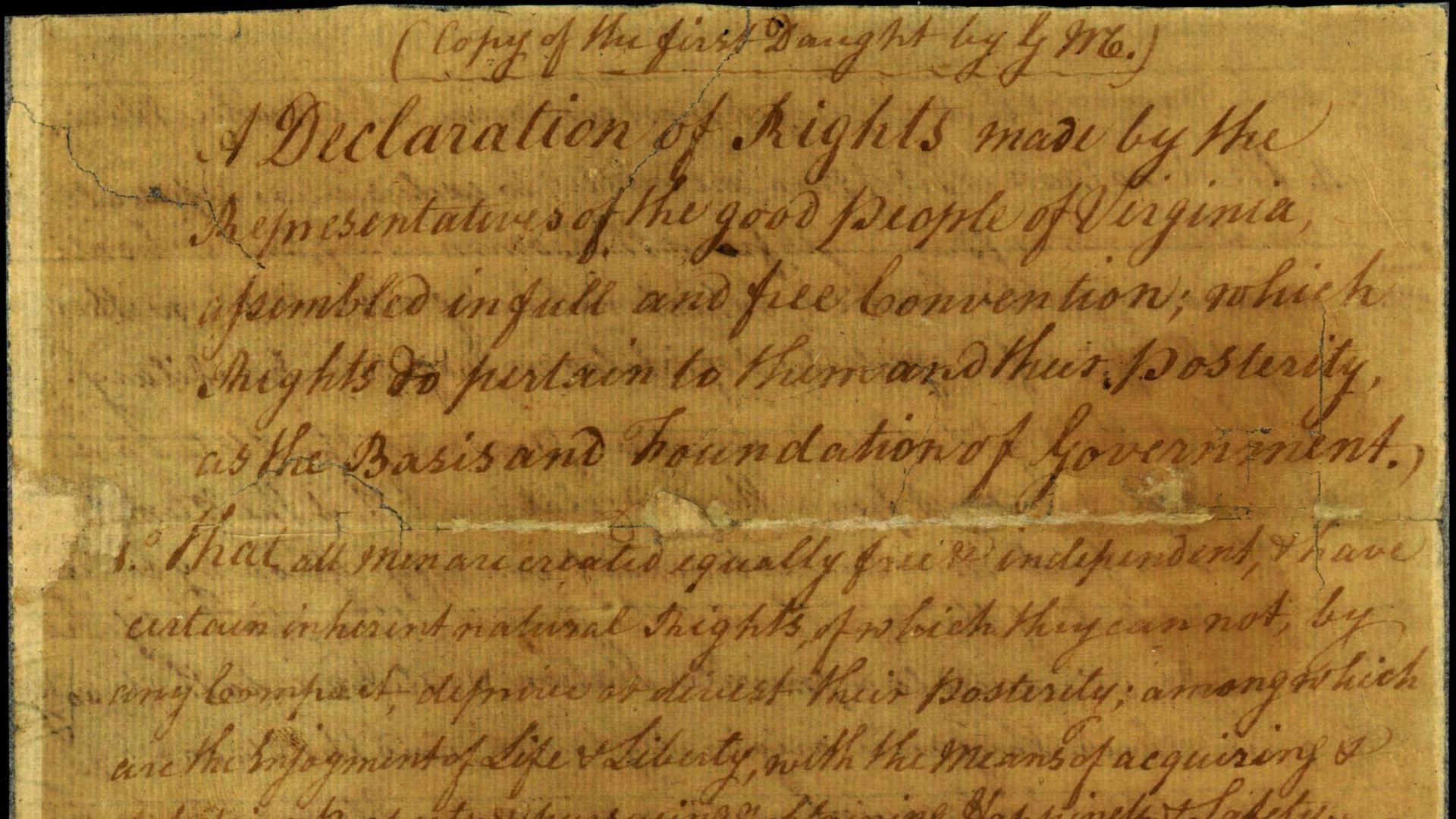 In the Virginia Declaration of Rights (VDR), written by George Mason, there are 16 Sections, which we can also refer to as Rights. Nearly each one possesses at least one phrase or reference that is recognizable in our three most precious American documents. Let’s check them out:

Thomas Jefferson, being a Virginian, obviously took note of this entire document as its opening Right helped formulate the opening (second paragraph) to the Declaration of Independence:

VDR: “That all men are by nature equally free and independent and have certain inherent rights…namely, the enjoyment of life and liberty…and pursuing and obtaining happiness…”

DI: “That all men are created equal: that they are endowed by their Creator with certain unalienable rights: that among these are life, liberty and the pursuit of happiness.”

This section exemplifies why America was founded in the first place: representation. This section is much more concise compared to the USC, but its main points seem to be derived by those who wrote the Constitution. The Declaration also appears to reflect these sentiments.

VDR: “That all power is vested in, and consequently derived from, the people; that magistrates are their trustees and servants at all times amenable to them.”

USC Opening Paragraph: “We the People of the United States…”

USC Article 1 Section 1: “All legislative Powers herein granted shall be vested in a Congress…”

USC Article 1 Section 2: “The House of Representatives…chosen…by the People…”

DI: “…deriving their just powers from the consent of the governed…”

The five-man committee who assembled the Declaration of Independence was not the only group who realized the tyrannical and imprudent methods of rule Great Britain was dictating. Mason gave the committee a good blueprint to follow.

VDR: “…when any government shall be found inadequate or contrary to these purposes, a majority of the community has an indubitable, inalienable, and indefeasible right to reform, alter, or abolish it…”

DI: “…that whenever any form of government becomes destructive  of these ends, it is the right of the people to alter or to abolish it…”

The first three Articles of the Constitution are much more in-depth, but this Section of the VDR demonstrates that the Virginians understood the principles of the separate branches of government.

VDR: “…the legislative and executive powers of the state should be separate and distinct from the judiciary…”

USC Article 1 Section 1: “All legislative Powers herein granted shall be vested in a Congress…”

USC Article 2 Section 1: “The executive Power shall be vested in a President of the United States of America…”

USC Article 3 Section 1: “The judicial Power of the United States shall be vested in one supreme Court…”

VDR: “…the vacancies be supplied by frequent, certain, and regular elections…”

USC Article 1 Section 1: “The House of Representatives shall be composed of Members chosen every second year…”

USC Article 1 Section 3: “The Senate of the United States shall be composed of two Senators from each State, chosen…for six years…”

USC Article 2 Section 1: “…President of the United States of America…shall hold his Office during the Term of four Years…”

During the 10-plus years preceding the Declaration of Independence signing, Parliament had been passing tax bills on Americans without their consent. Not only that, but the colonists were at times deprived of their property by the British. Mason ensured he addressed these concerns. The framers of the Bill of Rights made certain to follow suit.

VDR: “…all men…have the right of suffrage and cannot be taxed or deprived of their property for public uses without their own consent or that of their representatives so elected…”

BR 5: “…nor shall private property be taken for public use without just compensation.”

DI: “…”imposing taxes on us without our consent…”

When reading over this Section, one can’t help but recall the accusations made against King George III in the Declaration.

VDR: “That all power of suspending laws, or the execution of laws, by any authority, without the consent of the representatives of the people, is injurious to their rights…”

DI: “He has forbidden his governors to pass laws of immediate and pressing importance, unless suspended in their operation, till his assent should be obtained… He has obstructed the administration of justice, by refusing his assent to laws for establishing judiciary powers… For taking away our charters, abolishing our most valuable laws…For suspending our own legislatures…”

We have all heard (well, many of us at least) the phrase, “I plead the Fifth.” This eighth right in the Virginia Declaration is a precursor to that Amendment in the Bill of Rights (along with the Sixth . It also helped that King George III was stifling many of these rights the colonists had come to expect as common and Jefferson wasted no time pointing out those impositions.

VDR: “…a man has a right to demand the cause and nature of his accusation, to be confronted with the accusers and witnesses, to call for evidence in his favor, and to a speedy trial by an impartial jury of twelve men of his vicinage, without whose unanimous consent he cannot be found guilty, nor can he be compelled to given evidence against himself; that no man be deprived of his liberty except by the law…”

DI: “For depriving us, in many cases, of the benefits of trial by jury; For transporting us beyond seas to be tried…”

BR 5: “No person shall be held to answer for a capital, or otherwise infamous crime, unless on a presentment or indictment of a grand jury…nor shall be compelled in any criminal case to be a witness against himself, nor be deprived of life, liberty or property without due process of law…”

BR 6: “In all criminal prosecutions, the accused shall enjoy the right of a speedy and public trial, by an impartial jury of the State and district wherein the crime shall have been committed…and to be informed of the nature and cause of the accusation; to be confronted with the witnesses against him; to have compulsory process for obtaining witnesses in his favor…”

Mason’s observations in judicial matters are precise and it is very clear in his wording of this Right, which is mirrored almost exactly in the Eight Amendment.

VDR: “That excessive bail ought not to be required, nor excessive fines imposed, nor cruel and unusual punishments inflicted.”

BR 8: “Excessive bail shall not be required, nor excessive fines imposed, nor cruel and unusual punishments inflicted.”

One of the earliest issues that initiated revolt among the colonists was the Writ of Assistance, which more or less established a free-for-all regarding warrants, and searches and seizures. Mason was one of the many who took note of this, along with the framers of the Declaration and the Bill of Rights.

VDR: “That general warrants, whereby an officer or messenger may be commanded to search suspected places without evidence of a fact committed, or to seize any person or persons not named, or whose offense is not particularly described and supported by evidence, are grievous and oppressive and ought not to be granted.”

DI: “He has erected a multitude of new offices, and sent hither swarms of officers, to harass our people, and eat out their substance.”

BR 4: “The right of the people to be secure in their persons, houses, papers, and effects, against unreasonable searches and seizures, shall not be violated, and no warrants shall issue, but upon principal cause…and particularly describing the place to be searched, and the persons or things to be seized.”

This Right was recognized early on as one of the most precious.

BR 1: “Congress shall make no law…abridging the freedom…of the press…”

During the Revolutionary War, the militia was an absolute necessity for fending off Britain’s army. Mason understood the importance of having armed civilians. He also noted the importance of not having a standing army in times of peace, which is what the British had been guilty of. This Virginia Right is duly noted in the Bill of Rights and in the Declaration.

VDR: “That a well-regulated militia, composed of the body of the people, trained to arms, is the proper, natural, and safe defense of a free state; that standing armies, in time of peace, should be avoided as dangerous to liberty…”

BR 2: “A well-regulated militia, being necessary to the security of a free State, the right of the people to keep and bear Arms, shall not be infringed.”

DI: “He has kept among us, in times of peace, standing armies….has affected to render the military independent, of, and superior to, the civil power.”

VDR: “That religion…and the manner of discharging it, can be directed only by reason and conviction, not by force or violence; and therefore all men are equally entitled to the free exercise of religion…”

BR 1: “Congress shall make no law respecting an establishment of religion, or prohibiting the free exercise thereof…”

KEEP MASON AND VIRGINIA IN MIND

Whenever we think of our rights as Americans, it is very common to think of the framers of the Declaration of Independence, the United States Constitution, and the Bill of Rights. Perhaps now when we think of Jefferson, Adams, Franklin, and Madison, we may think of Mason as well. Without his blueprint, who knows what might have been left out of those precious documents.