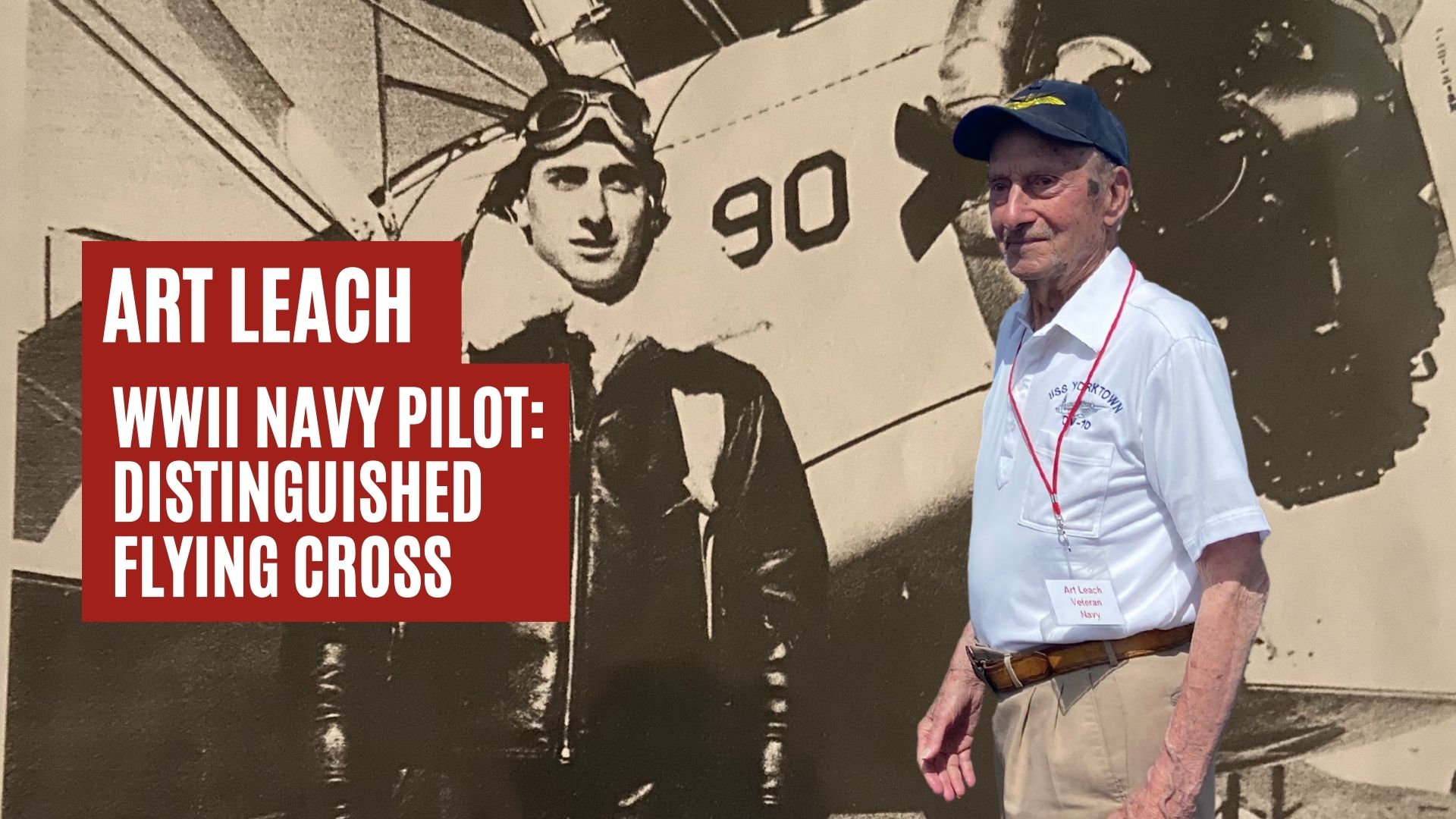 Arthur Leach is 101 years old. That is a very long time to live, but age doesn’t always provide perspective.

When I interviewed Leach recently for The Sons of History collection of military interviews, I was given a bit more perspective into his age. Before we began recording our conversation, he told me that his first car was a 1924 Model T, that he bought it for $18, and that gas was 16 cents per gallon. Sometimes age is just a number. Sometimes it's a story. Art’s age is full of stories.

He was a fighter pilot for the US Navy in World War II. He enlisted in February of 1942 during his final semester of college at Illinois Wesleyan University in Bloomington. He was informed he would be in uniform before he could walk across the graduation stage. After omse negotiating with the Navy office and some local leaders, it was agreed he could finish college before leaving for the service. He would graduate on June 8 and be in uniform June 10.

His flight training took him to Iowa City, St. Louis, Pensacola, Miami, Lake Michigan, San Diego, Seattle, and eventually the Hawaiian Islands. It would take approximately a year before he would be commissioned. The same day he was commissioned, he got married to Eileen Holforty, his wife for 38 years before her passing. The next day he went to Miami for fighter training.

Leach flew open cockpit bi-planes, like the Boeing-Stearman and the N3N, then the SNJ Texan, the Brewster F2A Buffalo, and ultimately the F6F Hellcat, which ultimately gave America air superiority in the Pacific. The Hellcat is best known in World War II for its dominance during the June 1944 invasion of the Mariana Islands, which would become known as The Great Marianas Turkey Shoot.

Before being stationed on the USS Yorktown, he made his first carrier landings on one of the two large ships refitted to be practice carriers called the USS Wolverine and the USS Sable. The practice landings were conducted on Lake Michigan and were absolutely pivotal to ensure pilots were capable of carrier landings and would have enough confidence to conduct such landings in the Pacific Ocean. Despite the ship’s massive size, landing on a carrier at sea was incredibly difficult.

“The carrier is moving about 30-35 miles per hour with the wind over the deck, you’re landing at about 90-100,” he said. “You come over the deck and circle and adjust on the downwind leg to get your position and your height in relation to the ship, and then you’d start your turn to come up the back. But you don’t want to a long straightway because your engine is big and you cannot see the deck when you’re going straight up behind it playing catch up. If you came in too fast, you’d be floating over the barrier and land on the guys who landed before you. That happens occasionally, and of course, kills everyone it hits.”

Countless calculations had to be considered just to land, like wind speed, carrier speed, plane speed, the tilt of the wings, the location of the landing, and the angle of the landing. Taking off was no easy feat either. Often, poor landings ended fatally. Poor takeoffs were even more deadly.

“The flight deck is a dangerous place,” he stated. “You take off at 3:30 or 4 o’clock in the morning and you can’t see the end, but you’ve got to get off. A lot of guys don’t make it and, of course, you never see them again. The ship runs right over him. The airplane sinks in 15 seconds. It’s going to sink even faster with the ship going about 30 miles or more. You hear it scrape all the way down.”

When it came to flying, the Japanese Zeros were the superior fighter planes in the Pacific, at least for a while. The Grumman F6F Hellcat was introduced in late 1942, but saw most of its action beginning in 1943. This is the year Art began combat missions. During his time in the air, he was credited with 3.5 kills. He also took aim at destroying Japanese gunboats.

“We could do 400 miles an hour and we’re a little harder to hit when we’re going 300 or 400,” he said about attacking the gunboats. “We’d pick up a little ground fire and get bullet holes in the wings and fuselage. As long as it doesn’t hit something life threatening, it doesn’t matter particularly.”

Leach flew missions throughout many of the Philippine Islands, including Manila, Luzon, Mindora, and Samar. He also fought in the largest naval battle in history, the Battle of Leyte Gulf. On one mission toward Tokyo, he said he noticed tracer bullets zoom past him. He suddenly felt something wet on his back.

He stayed in the Navy after the end of World War II as part of the Ready Reserves in Glenview, Illinois. After 14 years as a pilot, flying just about every plane the Navy had, he ended his career as a Senior Lieutenant. Shortly before he left the Navy, he was informed he was going to be promoted to Lieutenant Commander, which is equivalent to a Major.

“I didn’t bother to accept it because I was going to quit and secondly I wasn’t going to get a pension anyways, so rank wouldn’t mean nothing,” he said.

Throughout his career, Leach was awarded the Distinguished Flying Cross, which is awarded for heroism or outstanding achievement during an aerial flight. Charles Lindbergh was the first to receive the award after his flight across the Atlantic. Leach was also awarded two air medals.

Unfortunately, he doesn’t have his medals and citations he received, or even his military uniform, because his house burned to the ground in the 1950s while he and his family were out of town.

Leach may no longer have any of his war memorabilia, but age has not hindered his ability to recollect those memories from before, during and after the war. And those are memories that provide more than just stories. They provide perspective.